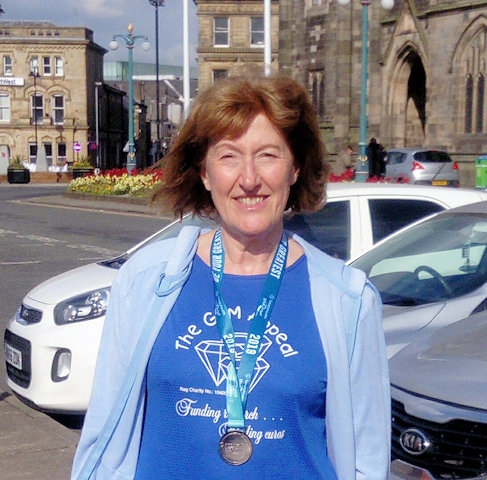 Wendy Mills, GEM Appeal Fundraiser and Trustee, recently ran the Great Manchester Run to raise money for the GEM Appeal, which is currently raising money for a Tecan machine which will cost £175,000.

The Tecan Machine prepares and arranges blood samples for analysis, enabling the specialist staff at the Willink unit at Manchester Children's hospital to concentrate on more complex tasks.

“I have taken part in the Great Manchester Run every year since 2004. It is very special to me, and I wanted to take part in the run again, but because of health issues, I only signed up two weeks before the event. It was a personal goal for me this year just to get round. I have been going to the Aquafit classes and on the treadmill at the Rochdale Leisure Centre gym trying to increase my fitness in readiness.

“This year was the best ever.

“The crowd, the bands, the organisation, everything was just fantastic.

“I remember seeing on the digital display at about 7k- "Left foot, right foot, repeat" and thought that was literally all I needed to do to get me round. Just keep going and you'll get there.

“I couldn't believe I finished in 1 hour 14 minutes and 13 seconds.

“It has certainly taught me never to give up on anything.

“I wore my GEM Appeal running top and have had some donations to The GEM Appeal, which I am really grateful for, and another medal too.

“I only wish I could have done more beforehand to raise more money.”

Wendy Mills and Joy Whitworth were joint winners Woman of Rochdale in 2014 for their endless charity work for The GEM Appeal (www.rochdaleonline.co.uk/news-features/2/news-headlines/87027/wendy-mills-and-joy-whitworth-woman-of-rochdale-2014-joint-winners).

The GEM Appeal is celebrating 25 years of fundraising in 2019 and has just received the Queen’s Award for Voluntary Service (www.rochdaleonline.co.uk/news-features/2/news-headlines/128208/the-gem-appeal-receives-the-queens-award-for-voluntary-service)

Wendy said: "It is about raising money, we want to be able to buy the Tecan machine as quickly as we can and have lots of events planned to help us reach our target. There's something to suit everybody."

The GEM Appeal raises money to purchase diagnostic equipment to enable the doctors and scientists at the Willink unit at the Royal Manchester Children’s Hospital to research, diagnose and treat children and young people with rare genetic and metabolic disorders which were previously incurable and prematurely ended many children and young people’s lives.

To donate to The GEM Appeal visit: www.justgiving.com/gemappeal