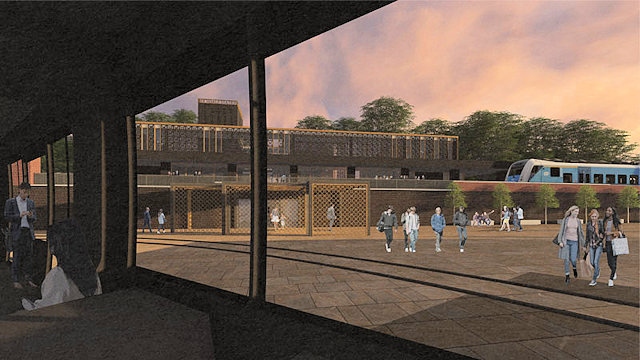 Masters degree students at the Manchester School of Architecture have re-imagined historic heritage sites in Rochdale to help breathe new life into the area.

After spending time investigating the local area to better understand the history and nature of Rochdale, students and staff members of Manchester School of Architecture have developed a series of sketches, drawings, models and writing to communicate their proposals, some of which are seen as essential developments to the town, to display in an exhibition to allow the people of Rochdale to comment on the work.

The postgraduate students have been working in collaboration with Rochdale Borough Council and Rochdale Development Agency and will showcase 50 architectural proposals at Rochdale Central Library in Number One Riverside.

Although Rochdale has been undergoing extensive regeneration in recent years, including new transport infrastructure, a new market, re-opening the river together with historic bridges and investment into public spaces, like many UK high streets, certain parts of the centre have continued to face challenges.

These include the historic high street and one of the main gateways to the town centre, Drake Street. The area was awarded Heritage Action Zone status in 2017 by Historic England and is the focal point for the students’ project with the aim to bringing new life to the area and the wider town centre.

John Lee, Senior Lecturer at Manchester School of Architecture and atelier leader, said: “This is work that has serious intent, social engagement, technical prowess, stylistic verve, and not a little humour. The students take delight in crafting buildings, spaces and components that amplify the past, serve the present, and prefigure the future. The outcome is a vision of a renewed Rochdale that takes the best of what is local and loved, and a vision that is, appositely, co-operative.”

The work is as an extension of a wider research project on small settlements in a number of contexts by the School’s ‘Continuity in Architecture’, which runs programmes for the design of new buildings and public spaces in villages, towns and cities.  It emphasises the character of a place and developing architectural and urban solutions that are strongly influenced by the materials, patterns and atmosphere of the area.

The group attempts to foster the next generation of architects with the necessary skills to work sensitively with people and places. The sketches, drawings, models and writing are all designed to communicate sometimes radical designs in an accessible and engaging way.

Laura Sanderson, Senior Lecturer at the Manchester School of Architecture, said: “It is so important for students who are engaged in architectural education to be exposed to the live context of a site and a situation. Working in Rochdale has allowed us to step outside of the normal academic environment and work with real people in a place with a rich heritage, to teach students how to respond to place through research, experimentation and collaboration.”

The opening night of ‘Rochdale Reimagined’ will be on Monday 24 June 5pm–7pm at Rochdale Central Library.

The designs will be open to the public at the library from 25 June – 16 August, every day except for Sunday.