Kentmere Academy and Nursery honoured in national celebration of teaching 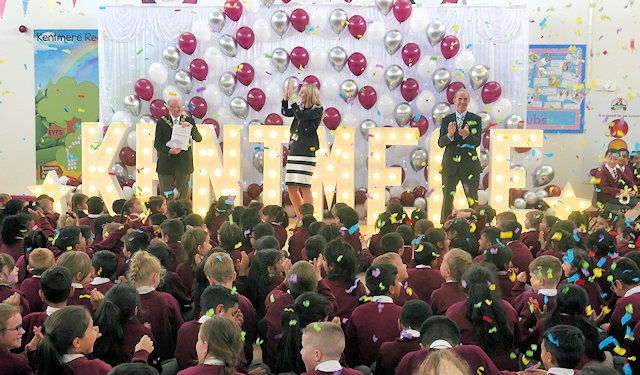 Kentmere Academy and Nursery has been awarded a Pearson Silver Teaching Award and been shortlisted for the Award for Primary School of the Year.

Selected from thousands of nominations, Kentmere Academy and Nursery is one of just 68 Silver Award winners across the country who were celebrated on Wednesday 19 June, on ‘Thank A Teacher Day’, as the Pearson National Teaching Awards marks its 21st year of celebrating excellence in education.

The Pearson National Teaching Awards is an annual celebration of exceptional teachers, founded in 1998 by Lord Puttnam to recognise the life-changing impact an inspirational teacher can have on the lives of the young people they teach – many of whom go on to train as teachers themselves thanks to the significant impact their teachers have had on them.

Kentmere Academy and Nursery has been shortlisted to win one of just 13 Gold Awards at the UK’s ‘Oscars for Teachers’. They will join fellow Silver Award winners, along with three Scottish Education Award winners and three winners of the Professional Teaching Awards Cymru, at the 21st UK ceremony of the Pearson Teaching Awards. It is a glittering event held at the Roundhouse on 20 October. It is broadcast on BBC2 the following week, on 27 October, as ‘Britain’s Classroom Heroes’ as a showcase of excellence in education.

On Wednesday 19 June, ‘Thank A Teacher Day’, and throughout this week the Teaching Awards Trust, the charity that runs the awards, is asking people up and down the country to say ‘thank you’ to a teacher who has made a significant difference in their lives. The Thank A Teacher campaign allows members of the public to send teachers a card in the post for free, by completing an online form and including a personal message. It takes two minutes but has a lasting impact on those exceptional teachers who receive them.

Education Secretary Damian Hinds said: “To be shortlisted for this award from thousands of nominations across the UK is a fantastic achievement and a testament to all of the winners’ commitment to the profession. I’m delighted that we are supporting the Pearson Teaching Awards to recognise the life-changing effect inspirational teachers have on the lives of young people.

“Teachers deserve our thanks every day, but as today is dedicated to them, I want to take the opportunity to give my personal thanks to each and every one of the 450,000 teachers up and down the country who are inspiring the next generation day in, day out.

“Meeting teachers and their pupils is the best part of my job and it’s been a pleasure to have visited over 100 schools since joining the Department. I’m constantly in awe of the dedication and enthusiasm I see both in and out of the classroom.”