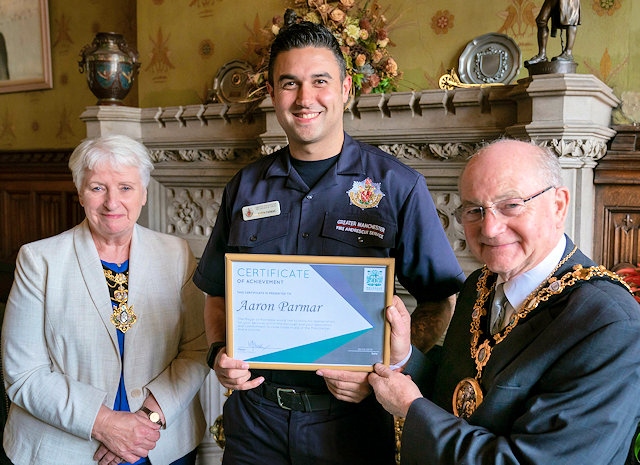 Rochdale resident Aaron Parmar has received a special award from the Mayor of Rochdale after completing a gruelling charity challenge, running 22 10K races in memory of each of the 22 victims of the tragic 2017 Manchester Arena attack.

Aaron was a police officer at the arena on the night of the bomb, witnessing the physical and emotional devastation. Since moving to the fire service last year he decided to show his support for the victims by running 220 kilometres (137 miles).

His feat began last October, including the Williams BMW Rochdale 10K in his hometown and he’s raised over £15,200, shared between the We Love Manchester Emergency Fund and the fund that will provide a permanent memorial to those who lost their lives.

This week Aaron was invited to Rochdale Town Hall for afternoon tea with the Mayor and Mayoress to be congratulated in person and presented with a certificate of achievement.

Mayor Billy Sheerin, said he was full of admiration for Aaron: “On behalf of the borough I wanted to congratulate Aaron on completing what has been a huge challenge. It has been a magnificent effort and we are all very proud of him.

"I know how much training and hard work has gone into this inspiring effort and the dedication he showed was truly humbling. Thank you also for the generosity of people who sponsored Aaron and together helped raise such a substantial sum of money.”

Over the last seven months Aaron’s quest took him to places including Blackpool, Rochdale, Southport, Tatton Park and Wilmslow before he completed his emotional final 10K in Manchester wearing full firefighter uniform, three days before the anniversary of the tragedy.

He’s also become friends with many of the families affected and says it was those friendships and memories that often spurred him on during the final kilometre.

"The families of the 22 have come out to the runs and it’s been emotional having them at the finish line and seeing how much it means to them. I’ve had huge support in Rochdale too which has really helped me push my fundraising beyond my expectations. I originally set myself a target of raising £500 so thank you to everyone who has made this worthwhile.”

Prior to this challenge, remarkably Aaron wasn’t a regular runner, so the prospect of one, let alone 22 10Ks meant a lot of preparation was required. Three months in to the challenge Aaron sprained his ankle, but despite his doctor advising him not to continue, he struggled around two races in January carrying the painful injury.

After his last 10K Aaron decided he wanted the good work to continue, so has set up an online running club in memory of the 22 victims.

Hive 22 is an online running club which continues to raise money for the families. Two pounds from the sale of each piece of kit, designed by Aaron, will be donated to trusts and charities set up by victims’ families every year on the anniversary of the attack.

He’s already planning another go at the Williams BMW Rochdale 10K: “There’s no excuse really as the Rochdale route pretty much goes past my house, but yes I do want to continue running and hope that by bringing more people together with the Hive 22 club we can raise a lot more in the future.”

It’s still not too late to add to Aaron’s total, visit: