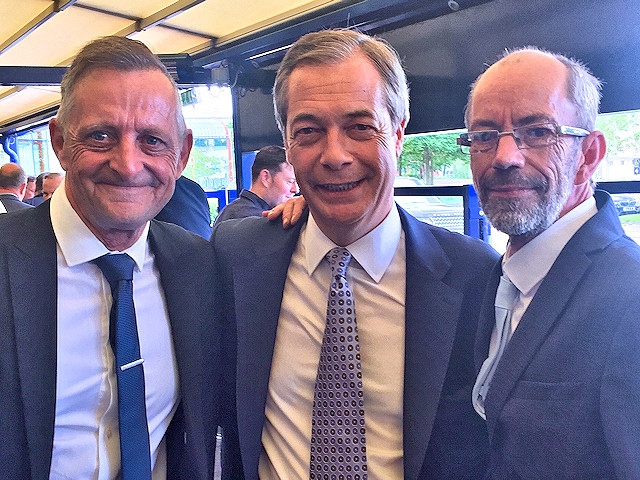 Two West Heywood councillors have left the Labour Party along with a former leader of Rochdale Borough Council.

Councillor Alan McCarthy has confirmed he has joined the pro-Leave Brexit Party formed by Nigel Farage, saying it is the only political movement standing up for democracy.

He took part in a rally in Birmingham where he was among more than 100 would-be general election candidates  joined by the former Labour leader of Rochdale council, Colin Lambert, who has also defected to The Brexit Party.

Rochdale voted to leave the EU at the 2016 referendum with 60 per cent of the electorate indicating they were in favour of Brexit.

Councillor McCarthy says Labour is no longer in touch with voters.

He said: “I have been a Labour Party supporter for 40 years, nigh on 20 of those as a sitting councillor for West Heywood. The Labour Party pledged to respect the decision of the referendum and has gone back on its word.

“I have resigned the Labour whip and will be joining The Brexit Party – the only party that is standing up for democracy – and the only party committed to investing in the north and the regions which, for too long, have been ignored by the other political parties.”

Mr Lambert was Labour leader between 2010 and 2014, when he was ousted from the position by Richard Farnell, but continued to serve as a councillor until May 2016.

The former West Heywood councillor said: “I have served the people of Rochdale for nearly two decades but I no longer believe my former party represents the people of this town.

“We need to deliver on the referendum result, that is why I have left Labour and will be joining The Brexit Party – I want to change politics for good.”

Brexit Party Chairman Richard Tice said he welcomed the pair, saying they could ‘no longer serve a Labour Party which has ignored the voice of the people it seeks to represent’.

In a further blow to Rochdale’s Labour group, Councillor Jacqui Beswick – partner of Councillor McCarthy – has resigned the Labour whip and will sit as an independent.

The one-time deputy leader, who also represents West Heywood, said she had taken the decision due to the way the party had handled ‘false allegations’ against her.

She claims the accusations were ‘untrue’ and hit her ‘very hard’.

She said: “It has been a very difficult time over the past two years serving as an elected member of the Rochdale MBC Labour Group, but my decision to go independent wasn't an easy one.

“I've been a supporter of the Labour Party for 45 years and councillor for 21 years but the serious false allegation by a senior Labour group member hit me hard, the group stood by and did nothing.

“I believed that after the local elections my complaint would be dealt with, sadly that wasn't the case and I have been told recently that it could be quite some time before that happens.

“I have been active within the Labour movement for many years since my days working at SEI in Heywood and, being a lifelong Trade Union Member, it is with great regret and a sad heart there was no option left but to resign the labour whip.”

Councillor Beswick added that she took the decision with ‘great regret and a sad heart’ but felt she had been left with no option but to resign the Labour whip.

Rochdale council’s Labour leader Allen Brett had short shrift for Councillors McCarthy and Beswick, declaring ‘they would not be missed’, whilst Heywood Township Committee chair Councillor Peter Rush said the news had come out of the blue.

He said: “I’m very shocked – and disappointed as chair I didn’t know about it.

“I feel as if I have got a very solid township behind me and have not had any problems before, other than the run of the mill.”

However, he said Councillor McCarthy had described himself as having been ‘at loggerheads’ with the party locally for some time.

Despite the loss of the pair from Labour’s ranks, he said he hoped Heywood Township Committee – which is made up of all the town’s councillors – would remain unified.

“We have to work non-politically as a body of people who are running the town and I will endeavour to keep it non-political for the good of Heywood.”

Asked whether he agreed with Councillor Brett’s harsh assessment he added: “You get a whip to serve the party. You should use that whip accordingly, not for any personal reasons, that’s the overall party and the township.

“You get elected as a Labour councillor to serve the borough and serve the party.”

North Heywood Councillor Liam O’Rourke said he had been ‘saddened and disappointed’ by the decisions made by Councillors McCarthy and Beswick.

Of Councillor McCarthy’s decision to join The Brexit Party, he said: “It’s not a party with the best interests of Heywood people at heart to be honest. But we will do as we always do in Heywood which is to work for the betterment of the town and put the town first.”

Following Councillors McCarthy and Beswick resigning the Labour whip, the political make-up of Rochdale council is as follows: