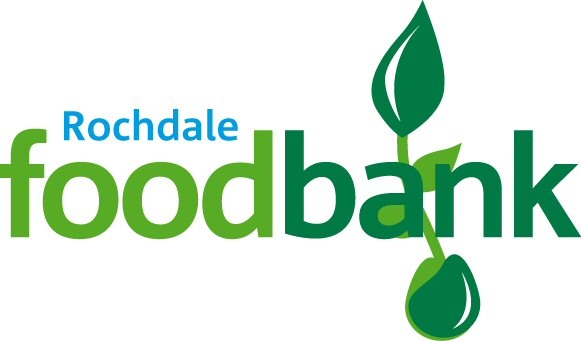 Trustees and volunteers at Rochdale Foodbank on South Parade in the town centre welcomed the Mayor of Rochdale, Councillor Billy Sheerin, and Tony Lloyd MP for a visit on Monday 29 July.

During their visit the Mayor and Mr Lloyd were formally welcomed by Martin Coupe, chair of the foodbank board of trustees, met with other trustees and members of the Monday team of volunteers, and talked with clients awaiting their emergency food parcels. They were shown around the building, and the way the foodbank is organised and operated was explained in detail to them.

The foodbank, which has been open for nearly seven years, has been busier than ever lately. In the month of June, 423 adults and 167 children were helped with food parcels, with the number of vouchers brought in by hungry clients reaching 338, an increase of 83 on June 2018. The Mayor and the MP also heard from another trustee, Steve Field, about the work of the Debt Advice Service available for clients.

The Mayor, Councillor Billy Sheerin said: “I am very familiar with the foodbank, as on many occasions I have been able to bring in donations of food from St Gabriel’s and St John’s Roman Catholic churches.

"I and all members of the council are extremely appreciative of the way that the hundred or so unpaid volunteers provide a lifeline for people in Rochdale who are finding it extremely difficult to feed themselves and their families.”

Tony Lloyd MP added his praise for the work of the volunteers, saying: “I frequently talk with clients of the foodbank who tell me how grateful they are for the vital help they have received. We all wish the foodbank’s service was not needed, but there are people who tell me they would have gone under were it not for the support they received here. The town of Rochdale is very fortunate that the foodbank exists.”

Rochdale Foodbank is part of the nationwide Trussell Trust network whose Chief Executive, Emma Revie, recently pointed out that the number of food parcels given out by foodbanks during the year from 1 April 2018 to 31 March 2019 had increased by 19% on the previous year.

The long summer holidays can bring extra difficulties for families on very low incomes, due to the loss of free school meals and the additional costs of child care so there is a heavy demand on foodbanks during the summer months and only donations from the public can enable this need to be met.

The people of Rochdale have been enormously generous over the past six and a half years, but the foodbank still needs additional supplies of items like long-life milk, breakfast cereals, tinned fruit, fish, potatoes and spaghetti, jam and biscuits. Financial donations are also very welcome as overheads run at around two thousand pounds every month, while five thousand pounds was spent in 2018 to supplement food donations.

Details of how to donate to the foodbank, and much other information about its work, can be found on its website: