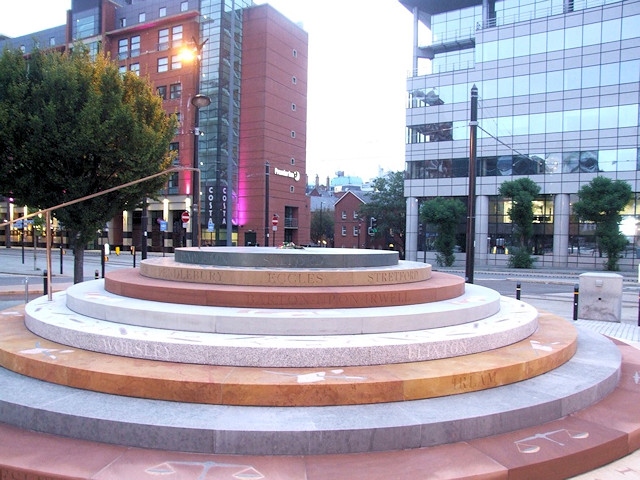 Manchester’s permanent memorial to the Peterloo Massacre is now on public view - in time for the 200th anniversary of the epoch-making event.

The memorial, at the junction of Lower Mosley Street and Windmill Street stands just metres from the heart of the former St Peter’s Field where the massacre took place on 16 August 1819.

The towns of Rochdale, Heywood and Middleton are mentioned on the memorial, as are others across Greater Manchester, for being known as places whence people marched on 16 August 1819, to take part in a 'peaceful assembly'.

The day became known as the Peterloo Massacre after 18 protestors were killed and nearly 700 injured after soldiers and special constables attacked the public protest calling for democratic representation.

Within days the slaughter was named ‘Peter-loo’, an ironic reference to the battleground of Waterloo, and is now considered a defining moment in Manchester’s radical history.

Now, with a memorial commissioned by Manchester City Council and designed by acclaimed artist Jeremy Deller and Caruso St John Architects, it will be permanently commemorated at last. The memorial is supported by national charity Art Fund.

The monument is conceived as a landscaped ‘hill’ made of concentric steps. It is designed to be a gathering place and platform for oratory and references the march of people from surrounding towns and villages to demand recognition of their rights.

These place names – along with the names of the 18 men, women and children who died – are engraved on the vertical faces of the steps around the memorial in positions that accurately depict their compass location.

The horizontal surface of the steps also have inlaid decoration, with imagery associated with Peterloo. The design of the top of the memorial also reflects events similar to Peterloo around the world, where peaceful protests have been violently broken up by the state.

The monument will be fully accessible after concerns were raise by disability access campaigners. Details of a proposal for how this will be achieved are being finalised.

The memorial will be there in its current form in the short term – enabling it to form a backdrop to the 200th anniversary commemorations - with the modification taking place afterwards.

A range of stones have been used to create the memorial, including granites, sandstones, slates and marbles from all regions of the UK. The bright range of colours (along with the names, emblems and texts incised into the surface of the stones, makes reference to the bold graphics of banners calling for social reform traditionally held up by protesters.

Councillor Luthfur Rahman, Executive Member for Skills, Culture and Leisure for Manchester City Council, said: “The Peterloo Memorial will be a fitting and lasting commemoration of the dramatic events of 1819, when people striving peacefully for democracy were killed and seriously injured, and their wider resonance in the struggle for better conditions.

“The spirit of radicalism which was present on that day is still woven into the thread of the city’s character and we believe this memorial will a visual depiction of that.”

The memorial officially opened on Friday 16 August, the 200th anniversary of Peterloo, with a day of events in the forecourt of Manchester Central, close to the site of St Peter’s Fields. The event took place from 12pm to midnight, marking the culmination of a three-month programme of commemorative events.

Communities, artists and musicians from across Greater Manchester and beyond gathered for a day of performances and as night fell, photographer Red Saunders’ Hidden Tableau Peterloo Massacre images were projected onto Bridgewater Hall.