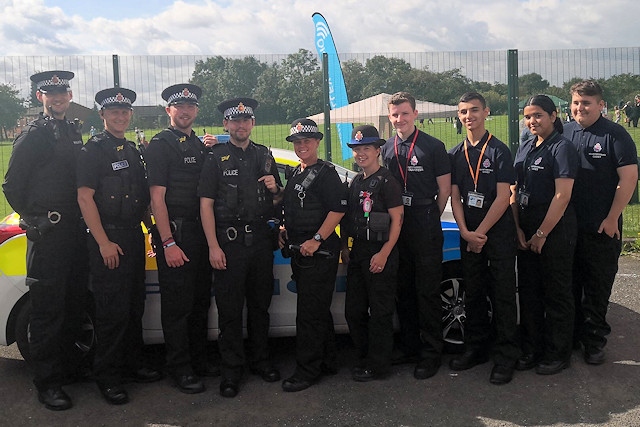 This week, he discusses community policing.

I was not working on Sunday but went along to see how it all went. Having mentioned it to my family, my young cousin and my grandma asked to come along too, so a strong showing from the MacGregor clan were in attendance.

I felt very proud when I saw it up and running. I know the effort that PC Honey, RBH and Rochdale Council have put into this event - planning which is an addition to their normal responsibilities. I know that (despite my insistence) that PC Honey has been working on this for free in his own time to try and make it as good as it could be.

PC Darren Davies was nominated to be the goalkeeper in a ‘score a goal against your local bobby’ activity. Sadly, despite Darren taking this responsibility extremely seriously and muddying his uniform literally diving to save as many efforts as possible, we ran out of ‘I scored against PC Davies’ certificates within the first hour. My Grandma says her certificate will take pride of place on the mantlepiece.

The Rochdale Police Cadets were looking smart and handing out crime prevention items and leaflets. Although he does not share it much - PC Honey has revitalised the cadets’ scheme in Rochdale and we now have a brilliant group of young people volunteering their time for community activity every week.

As ever, one of the most popular activities at the event was the police car. I watched for a little while as children got dressed up in the mini police uniforms and then sat in the car and Sgt Twidale showed them how to activate the lights and sirens. A young boy got out of the panda, smile beaming, and excitedly said to their dad: “Daddy, when I’m a grown up, I want to be a policeman”. I remember my own version of that moment during a police open day back in the early 1990’s.

One thing that struck me at the event was that it was so clearly one team. In my time as a Neighbourhood PC around 2008/2009 we still only paid lip service to partnership work. It was a ‘nice thing to do’ rather than being properly valued. The next generation of staff from all organisations have made vast improvements on what I was doing a decade ago. Each time I spoke to Police, RBH or Council staff they would say how brilliant a member of staff from another organisation was and when I spoke to that person, they would praise a member of staff from yet another organisation.

The event was symbolic of the incredible, and often unnoticed brilliant work going on working together in Rochdale. Moments like that make me very proud of the wider team I am part of - a team consisting of not just police any longer, but genuinely including partners and the wider community working positively to make things better in a time of cynicism.

I doubt the Police Officer who let me set off the sirens and scare the life out of my dad back in 1991 thought that moment was going to change that boy’s life, but it did and led me to this job. The reason I have always felt drawn to Community Policing is the potential to do just that.

We might not always change lives, but why aim for anything less?