You are Here: Home » News » News Headlines » Recorded cases of sexual grooming crimes in the North West up by 25% 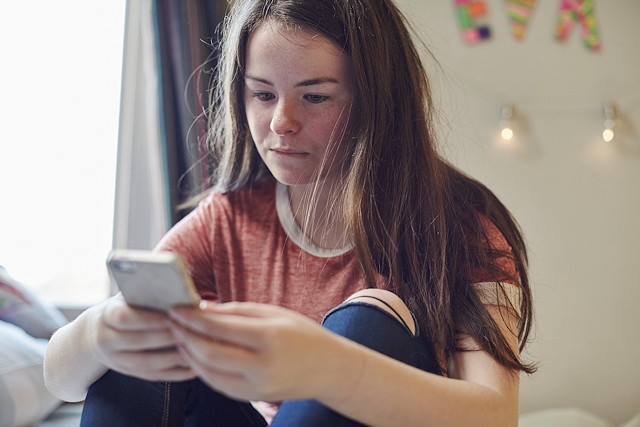 In England and Wales, there were 4,373 offences of sexual communication with a child recorded in the year to April 2019 (posed by model)

The number of grooming crimes recorded by police in the North West has increased by a quarter in the last year, data obtained by the NSPCC has revealed.

There were 710 offences of sexual communication with a child recorded in the year to April 2019, compared with 565 in the region for the previous year.

In England and Wales, there were 4,373 offences of sexual communication with a child recorded in the year to April 2019 compared with 3,217 in the previous year.

The offence came into force on April 3, 2017, following an NSPCC campaign.

The data obtained from 43 police forces in England and Wales under Freedom of Information laws also revealed that, where age was provided, one in five victims were aged just 11 or younger.

Overall in the last two years, Facebook-owned apps (Facebook, Messenger, Instagram, WhatsApp) and Snapchat were used in 83% of the instances where police in the region recorded and provided the communication method. Instagram was used in 26% of them.

In England and Wales the number of recorded instances of the use of Instagram, which is owned by Facebook, was more than double that of the previous year.

The government has indicated it will publish a draft Online Harms Bill early next year, following the NSPCC’s Wild West Web campaign. The proposals would introduce independent regulation of social networks, with tough sanctions if they fail to keep children safe on their platforms.

The NSPCC believes it is now crucial that Boris Johnson’s government makes a public commitment to draw up these Online Harms laws and implement robust regulation for tech firms to force them to protect children as a matter of urgency.

Peter Wanless, NSPCC Chief Executive, said: “It’s now clearer than ever that government has no time to lose in getting tough on these tech firms.

“Despite the huge amount of pressure that social networks have come under to put basic protections in place, children are being groomed and abused on their platforms every single day.  These figures are yet more evidence that social networks simply won’t act unless they are forced to by law. The government needs to stand firm and bring in regulation without delay.”

A Facebook company spokesperson said: “There is no place for grooming or child exploitation on our platforms and we use technology to proactively find and quickly remove it.

“We also investigate reports from the community with a content and security team of over 30,000 people who respond to reports 24/7.”

Freya* was 12 when, while she was staying at a friend’s house, a stranger bombarded her Instagram account with sexual messages and videos.

Her mum Pippa* told the NSPCC: “She was quiet and seemed on edge when she came home the next day. I noticed her shaking and knew there was something wrong so encouraged her to tell me what the problem was.

“When she showed me the messages, I just felt sick. It was such a violation and he was so persistent. He knew she was 12, but he kept bombarding her with texts and explicit videos and images. Freya* didn’t even understand what she was looking at. There were pages and pages of messages, he just didn’t give up.

The NSPCC’s Wild West Web campaign is calling for social media regulation to require platforms to:

Take proactive action to identify and prevent grooming on their sites by:

The charity wants to see tough sanctions for tech firms that fail to protect their young users – including steep fines for companies, boardroom bans for directors, and a new criminal offence for platforms that commit gross breaches of the duty of care.

*Names have been changed to protect identities