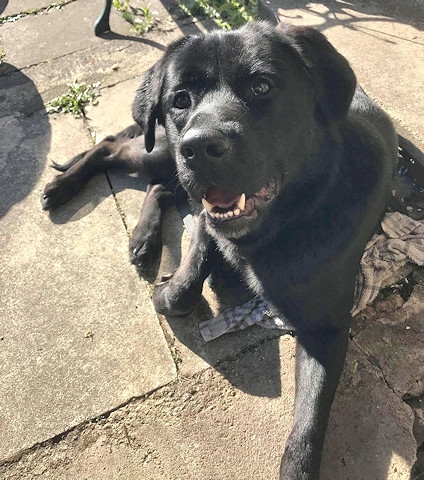 A Littleborough family are urging other pet owners to be aware of the deadly effects of chewing gum after their beloved dog dies.

On his walk on Friday 23 August, Winston was described as fine for 30 minutes before things suddenly took a turn for the worst when he began to vomit and become lethargic.

Taken to an emergency vet, Winston was confirmed to have xylitol poisoning and was placed on a glucose drip as his body could no longer manage its own blood sugar levels.

Two days later, vets had no other option but to put him down, leaving his owners, Kirsty and Dave Lanyon and their 4-year-old daughter Amelia, heartbroken.

Kirsty said: “We went from having a perfectly healthy dog running around, absolutely loving life chasing a football whilst his sister rode her bike, to 30 minutes later he was so poorly that he never recovered.

“I’ll never, ever forget the sadness in his eyes, and I hope one day when I think of him, I see that big goofy face again rather than these horrible memories. All because someone spat some chewing gum out instead of using the umpteen wheely bins, which were out awaiting collection, just yards away.

“All dog owners need to be aware of the dangers of xylitol and how it is in so many items just lying around your house. Those brownies/cupcakes you made from a packet mix? Full of it. That pizza you got from the takeaway? Full of it. Your toothpaste, pasta, peanut butter, anything that says sugar free, it’s probably in their too. But it won’t be labelled xylitol, it’s labelled ‘sugar alcohol’.”

Referring to her daughter, Amelia, Kirsty added: “His four-year-old sister doesn't quite understand. Hearing her ask over and over why Winston had to go heaven is horrendous in ways you couldn't imagine.

“In memory of our beloved Winston, check your cupboards, check everything you give your dog. We had never heard of it, so when our boy started vomiting and then collapsed within 30 minutes of getting home from his last ever walk, our last ever walk as a family of 4, we were clueless.”

Dave added: “We don't want anyone to go down the road that we have been down. That 3-year-old boy had his whole life to live.”

Xylitol, a sweetener used in many products with one of the most common being sugarless chewing gum, is harmless to humans but is toxic to dogs.

In dogs, xylitol causes the pancreas to react, sending high levels of insulin into the blood. This flood of insulin causes sugar levels in the blood to drop from normal to dangerously low.

Symptoms can be rapid or delayed for up to 12 hours, so it is advised not to wait for symptoms to appear before going to the vet if you think your dog has ingested xylitol.

According to Vets4Pets, sugar-free chewing gum or sweets, mouthwash and cough syrup are just a few examples of products which frequently contain toxic levels of xylitol.

The life-threatening sugar substitute is extracted from certain plants and manufactured into a white powder that tastes similar to sugar. The popularity of xylitol has grown as demand for low-sugar food increases, and xylitol is now being used in oral care products, pharmaceuticals, and as a sugar-sparing food additive.