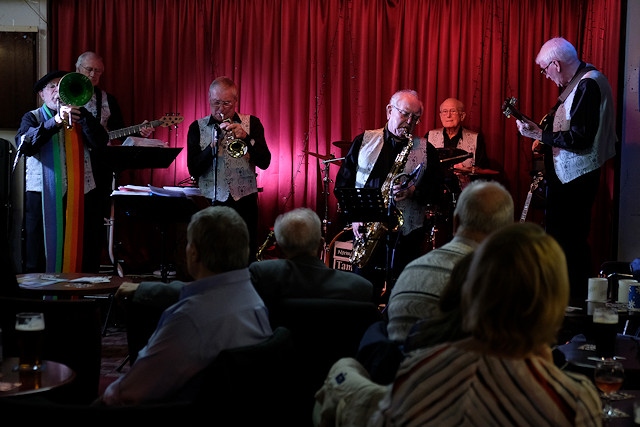 The ever-popular Tame Valley Stompers returned to Castleton’s Newtown National Club and to “Jazz On A Sunday” on Sunday 8 September.

Alongside leader and drummer Norman Pennington were Terry Brunt on trombone, Roger Wimpenny (trumpet), Paul Broomhead (reeds), John Gordon (banjo and guitar) and Pete Smith on bass entertaining a good sized and highly appreciative audience with their accustomed mix of longtime favourites, new arrangements and “occasional” big band offering – which this time around turned out to be ‘Christopher Columbus’.

There were vocals aplenty - witness ‘Darktown Strutters Ball’ and ‘When Somebody Thinks You’re Wonderful’ from Pete, ‘The Curse Of An Aching Heart’ from Paul, who also weighed in with his trademark clarinet tour de force, ‘St Philip Street Breakdown’, and from Roger with ‘Black And Blue’, ‘You Belong To Me’, ‘Swing That Music’, ‘Sunset Stomp’, the ever-so slightly risque ‘You Got The Right Key’, ‘Bobby Shafto’ and at the end of the evening ‘Tight Like That’ morphing first into ‘Route 66’ and finally ‘The Saints’.