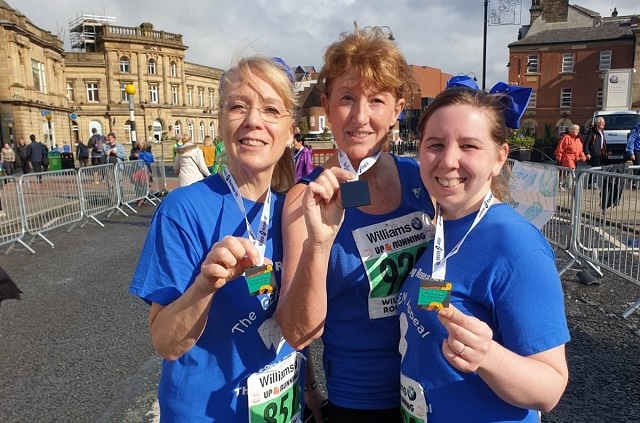 L-R: Karen, Wendy and Katie show off their medals

Three members of the GEM Appeal charity took part in the Rochdale 10k on Sunday (6 October), to raise funds towards a £175,000 piece of equipment for Manchester Children’s Hospital.

Founder of the GEM Appeal, Karen Johnson and her daughter, Katie Hoather, were joined by trustee Wendy Mills in the race, which saw them raise much-needed funds towards the Tecan machine, which prepares and arranges blood samples for analysis, enabling the specialist staff at the Willink unit at Manchester Children's hospital to concentrate on more complex tasks.

Wendy, who took part in the Great Manchester Run for the appeal earlier this year, said: “Karen had never entered a 10k before, and Katie had never raced before.

“Their runs exceeded all expectations, including theirs. It was amazing and they loved it.

“It was a great run, fantastic route, well organised, well marshalled, well supported and a great showcase event for Rochdale.”

The GEM Appeal (‘Genetics. Enzymes. Metabolics.’) is run entirely by volunteers and has raised over £3 million towards funding research into, and finding cures for, genetic diseases. The charity celebrates 25 years of fundraising in 2019, having been founded in 1994 as Karen’s sons, Simon and Mikey, were born with Hunter Syndrome. Tragically, both boys lost their lives to the incurable disease at the age of 12.

So far, money raised has built a research and treatment unit for The Willink Unit as well as purchasing much-needed medical equipment, to help research, diagnose and treat children and young people with rare genetic and metabolic disorders which were previously incurable, prematurely ending many young lives.

Because of the money raised by the GEM Appeal, children are living longer healthier lives and the future is more positive for those diagnosed now.

Earlier this year, the GEM Appeal was presented with the Queen’s Award for Voluntary Service, the highest award a voluntary group can receive in the UK.

To donate towards the Tecan machine, please visit: