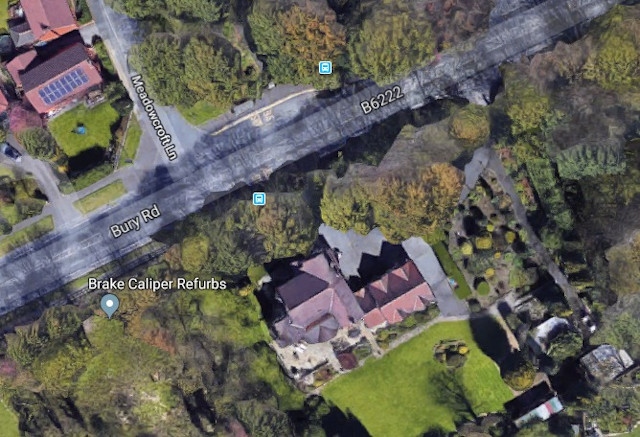 Residents fear road danger is ‘inevitable’ after permission was granted for new homes near a busy main road.

Rochdale council planners have given the go-ahead for seven large detached homes to be built off Bury Road, in Bamford.

The existing property at the 0.38-hectare site is to be demolished.

The decision – carried thanks to Councillor Shakil Ahmed casting vote as chair – was taken despite fears delivery vehicles would have to reverse off the site, onto Bury Road, due to the access road’s turning head not being large enough.

Councillor Shah Wazir had moved to approve Wiggett Construction’s scheme on the grounds it was on a brownfield site and ‘one of the better proposals for the development’.

But objectors pointed to a report from the council’s highways department, which highlighted the traffic issues that would be created by the plans.

It says a bin lorry would be unable to turn around in the cul-de-sac, but the road cannot be adopted and brought up to standard as it is not wide enough.

This meant that footpaths could not be installed for pedestrian safety.

The report adds: “The current road is too narrow and with the curve of the road vehicles will struggle to pass. This will be particularly difficult if visitors’ cars are parked on the highway.”

Objector Alun Evans, of Camberley Drive, in Norden, said the problems could be resolved if the development was scaled down from seven houses, to six.

He had told the committee “They are trying to squeeze as many houses into one plot, they have an unadoptable road and the thing getting squeezed is the road and the create road safety issues.”

However, Councillor Faisal Rana said the applicant had compromised enough by reducing the number of houses proposed in an earlier application from eight to seven.

After the meeting Mr Evans said residents were dismayed by the decision to approve the plans.

He said: “We’re very disappointed that they are going to ruin what could be a very nice development by putting too many houses on there – they won’t be as desirable.

“Residents’ issues related to road safety – which were highlighted by highways – were completely ignored, purely because it’s an unadopted road.

‘The road on site isn’t wide enough and, because of cars parked up, it will end up that delivery vehicles will reverse out on to Bury Road – it’s inevitable.”

During the meeting, ward councillors Angela Smith and Pat Sullivan both spoke to oppose the application.

She added: “The mind boggles at the thought of any large vehicle having to back out into Bury Road because it can’t turn around in the turning circle.”