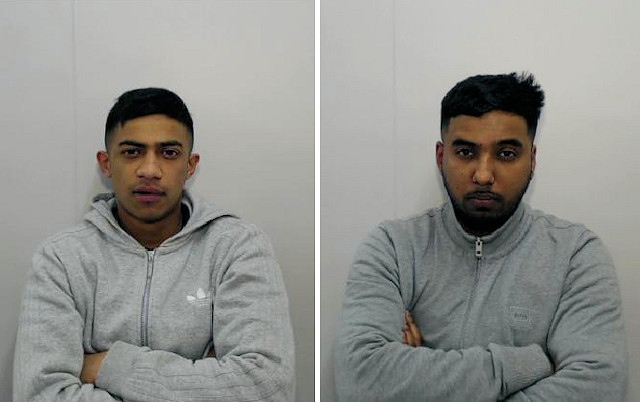 Four men have been jailed for their part in a brutal gang attack which left a man with life changing injuries after being hit with an axe in Rochdale.

The man who delivered the blows with the axe - Mohammed Sajid, 23 - was sentenced today (Friday 18 October 2019) to 18 years in prison. He was found guilty of attempted murder following a four-week trial at Manchester Minshull Street Crown Court.

On 17 October 2017, two workmen were travelling on Church Road in Rochdale when they came across Habibur Rahman, 27, launching a furious tirade at a woman sat in a stationary Citroen.

After realising that the two men were watching, Habibur approached their car and began hurling abuse at them too before leaning over to touch the vehicle, prompting one of them to get out and push him away.

At this point Habibur started making threats and pulled out his phone, claiming that the man would ‘regret it’ as this was ‘his area’ and he should ‘just wait and see’.

After becoming increasingly concerned by the threats, the men drove away but heard Habibur shout after them “I’m gonna get my boys down”.

A short time later, the men were packing up their tools at a nearby worksite, along with two other colleagues, when their car was blocked in by a Vauxhall Zafira. Habibur emerged from the car and began walking towards the four men shouting, “You’re going to get it.”

Two other vehicles then pulled up and a large group of men armed with an axe, machete and a claw hammer emerged and made a beeline for the intended targets.

As they closed in on the workmen, Habibur punched the man he had been involved in the original confrontation with, cueing the start of the attack.

Once the assault had begun, Sajid approached one of the two men who hadn’t been present during the original confrontation and said to him “You’re going to get stabbed bro” whilst wielding an axe.

He swung the axe, striking the victim in the ribs, instantly breaking them and puncturing one of his lungs. He then lifted the weapon high into the air and brought it down in the direction of the victim’s head, but the victim put his arm up to protect himself.

Unfortunately, the axe came down with such force that it almost chopped his hand off, leaving him with life changing injuries.

After witnessing the disgusting attack on his colleague and fearing for their safety, one of the workmen started the motor of a chainsaw in an attempt to scare the attackers off.

This plan worked and the offenders fled the scene.

Mohammed Sajid, 23, of Rochdale, was sentenced to 18 years in prison after being found guilty of conspiracy to commit violent disorder and section 18 wounding with intent to commit.

Arslan Ali, 23, of Rochdale, was sentenced to 4 years in prison after being found guilty of conspiracy to commit violent disorder.

Zillur Rahman, 30, of Rochdale, was sentenced to 3 years in prison after being found guilty of conspiracy to commit violent disorder.

Habibur Rahman, 27, of Rochdale was sentenced to 4 and a half years in prison after being found guilty of conspiracy to commit violent disorder, section 47 assault and occasioning actual bodily harm.

Speaking after the sentencing, Superintendent Richard Hunt of GMP’s Rochdale District, said: “There are not many fitting words to describe this attack but two that spring to mind are disgusting and brutal.

“The incident itself is unbelievable but the fact that it stemmed from such a minor confrontation is staggering.

“Mohammed Sajid’s decision to bring and use an axe left a 19-year-old man with life changing injuries that required multiple surgeries and has affected his ability to work.

“The sentences secured today are as a result of the meticulous investigation work of our officers. Their dedication to bringing criminals like this in front of a judge to answer for their crimes means Rochdale is a safer place and we cannot forget that without the support from our communities, this simply would not be possible.

“The men involved in this brutal attack fully deserve the sentences imposed on them today and I hope it will bring the victim, witnesses and the family in the case some closure to this terrible chapter of their lives.

“For them, having to not only relive what happened but have it played out in court for everyone to see has been far from easy. I’d like to pay tribute to their stoicism and the support they’ve shown.