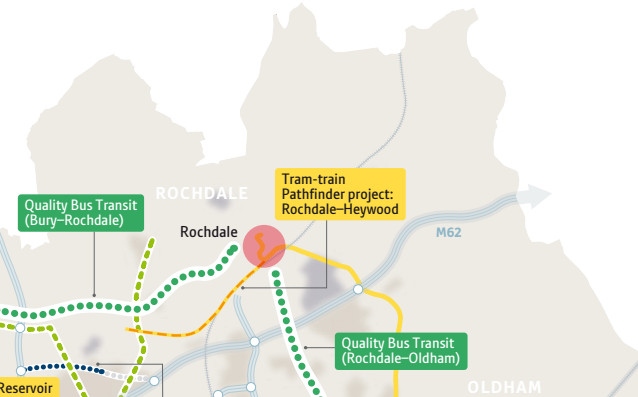 A pilot ‘tram-train’ route has been proposed between Heywood and Rochdale by Transport for Greater Manchester (TfGM).

One of three potential ‘Pathfinder’ routes published in the Draft Delivery Plan 2020-25, the northern Pathfinder scheme is proposed to call at the existing Rochdale station and provide new connections between Oldham, Rochdale, Heywood and other communities along the route.

The tram-train service would enable adapted Metrolink vehicles to run on the same lines as trains. Tram-train technology is common in European countries, but has only recently been tried in the UK with the first running between Sheffield and Rotherham.

Should the local Pathfinder service prove successful, a proposal for a Metrolink or tram-train service linking Rochdale to Bury is expected to be developed in the next five years following further investigation.

A spokesperson for TfGM said: “At this early stage of development, a number of options are being considered as to what platform would be used.

“Any options proposed for the scheme will involve consultation with local stakeholders.

“If successful, this could pave the way for a further expansion of our rapid transit network making much better use of our existing extensive network of rail lines, by the 2020s and 2030s.”