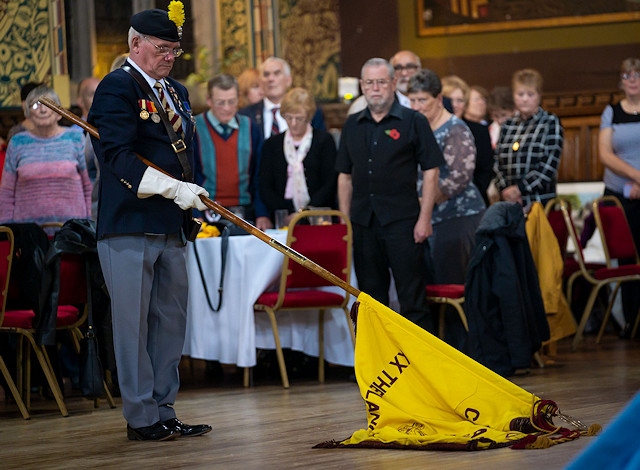 A standard is lowered in remembrance

The borough came together to pay tribute to the armed forces community at a special Festival of Remembrance at Rochdale Town Hall on Friday (1 November).

A nostalgic evening included an act of remembrance, performances by military bands, parades and speeches.

Over 150 people packed into the Great Hall to enjoy music from the Scots Guards Association Pipes and Drums and The Band and Corps of Drums of the Royal Regiment of Fusiliers (Lancashire).

Rochdale’s Festival of Remembrance is an annual event, organised by veterans, to enable the wider community to pay tribute to those who served and sacrificed.

Councillor Janet Emsley, cabinet member for the armed forces, said: “This was another moving and memorable Festival of Remembrance as we gathered to remember and reflect on the sacrifices members of the armed forces community have made through the generations.

“It was lovely to see young and old coming together to pay tribute to those who have done so much to protect our freedoms, liberty and values. I would like to thank everyone involved in organising such a great evening, which showcased our borough at its finest.”

Caen Matthews, chairman of the Rochdale branch of The Royal British Legion, said: “It was wonderful to see so many people coming together to support the armed forces’ family and remember the sacrifices of so many brave men and women. It is important that we remember why we remember. Veterans today need our support, as they as always have done. Lest we forget”

All money raised at the Festival of Remembrance will go to local armed forces charities to support local veterans and dependants.