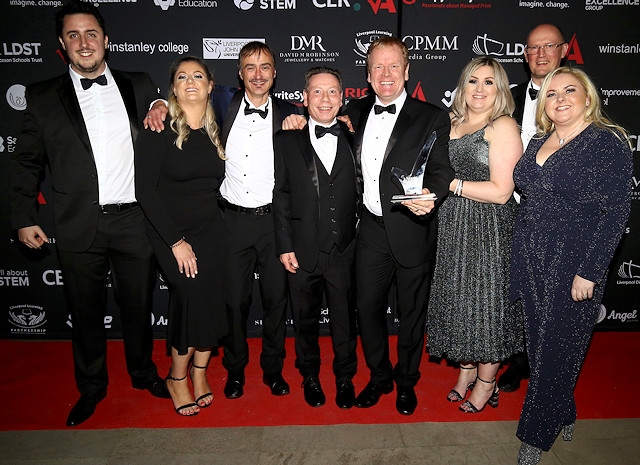 Staff from Cardinal Langley at the Educate Awards

The school won the STEM Project of the Year Award, fighting off stiff competition from other shortlisted schools in Liverpool and Wigan.

The awards are now in their eighth year and are the largest education awards in the North West.

Over 700 guests gathered for the Educate Awards ceremony held at the Liverpool Anglican Cathedral, hosted by broadcaster Simon ‘Rossie’ Ross.

On the night, 21 awards were handed out to schools in the Liverpool City Region, Lancashire, Cheshire and Greater Manchester.

Cardinal Langley impressed judges because of its recent representation of the North West at the ‘Race for the Line’ national rocket car competition.

Three year 7 students travelled to RAF Wittering to compete against the other regional finalists to design and build a rocket car to travel over 60 mph. They achieved second place against schools competing from across the UK.

Andy Bridson, Headteacher of Cardinal Langley, said: “We are incredibly proud to have won the STEM Project of the Year award. The UK is a world leader in research and innovation and our students are involved in a range of exciting projects which are inspiring the next generation of scientists, designers and engineers. It is wonderful to see young people so enthusiastic about science and technology. They are developing very high level skills at such a young age and it is good to see them collaborating with other schools across the country.”

With Greater Manchester’s thriving STEM community, Cardinal Langley is proudly preparing students to enter the science, technology, engineering and maths industries as they develop the right skills for the future.

Kim O’Brien, founder of the Educate Awards, said: “A huge well done to Cardinal Langley RC High School on its fantastic award win. We are so proud to host an event which champions the creativity, diversity and dedication of teachers, school support stars, schools and colleges from across the North West. This year we have been inundated with exceptional entries and so congratulations to all the winners, runners-up and finalists for 2019.”