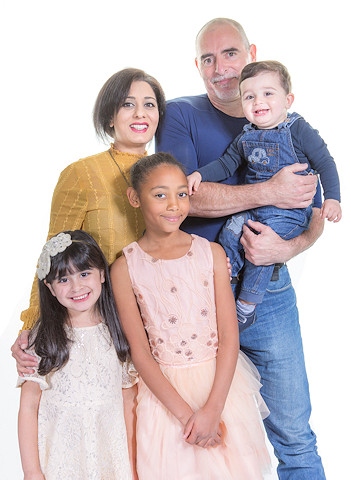 Dr David Penney, pictured with his family, is to receive an award for his palaeontology work

Dr David Penney, a Rochdale palaeontologist, will be receiving the 2019 Marsh Award for Palaeontology at a ceremony hosted by the Natural History Museum in London, on Friday 13 December.

The reputable award recognises ‘unsung heroes who have made a major contribution to the promotion of palaeontology in the UK’.

Speaking about receiving the award, Dr Penney said: "It is always nice to have your hard work recognised by your peers and I am very grateful to be the proud recipient of this prestigious award."

The Rochdale-based doctor has set up the Siri Scientific Press (SSP), a website that specialises in publications and books on palaeontology and entomology, including the highly acclaimed Dinosaurs of the British Isles, by Dean Lomax, of ‘So you want to be a palaeontologist?’ and ITV’s ‘Dinosaur Britain’ fame.

Based at Arrow Mill in Castleton, Siri Scientific Press has now been operating for 11 years.

The website includes practical advice for fossil enthusiasts of all ages written by Dr Penney himself.

Dr Penney, who has a background in academic palaeontology, is an internationally renowned leading researcher on fossil spiders, with a focus on spiders preserved in amber.

He has discovered and named more than 25 new species, two of which have been named after his daughters, Amelia and Siri, and has two fossil species named after himself by other researchers.

Dr Penney has also been involved in the arrival of Dippy the Dinosaur who will be featured at Number One Riverside from 10 February 2020 – 28 June 2020. He was consulted in the early stages of Rochdale’s bid to host Dippy in the Northwest.

Aside from his numerous qualifications in the field of palaeontology, Dr Penney spends his time powerlifting and has written a book entitled ‘Escape the Fat Trap’ after transforming his figure, losing a third of his bodyweight.