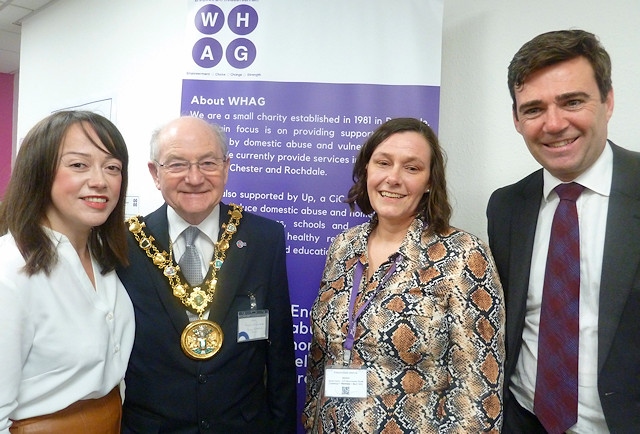 Founded by Rose Sumner in 1981, WHAG aims to provide affordable housing to homeless women aged 16-65. Now, the organisation runs domestic abuse services across Rochdale, Bury, Cheshire West and Chester, and had been operating from its Rose Court project in Castleton.

Andy Burnham, the Mayor of Greater Manchester, attended the event to open the new building and gave a short speech expressing his support to the charity.

He said: “I think this facility you’ve got gives you a fantastic base from which you could grow; to do even more. I know the need out there is as high as ever, so the time is now to give you the resources to get on and do the job. I’m really proud to be here tonight to do this official opening with you.”

The mayor indicated that it is important to build a better base for the voluntary sector, as he recognises that public services can offer limited help. He called for a co-operation between the public and voluntary sectors to achieve a better outcome in the fight against homelessness and domestic violence within women and men.

He continued: “For me, the public services will always be able to help a bit, but they’re not really set up to provide that whole support. We recognise that the voluntary sector was the crucial player in this journey because they could provide that individual support. I recognise that the voluntary sector is in a better place to do that than often statutory services.

“I think people need many different types of support and I do believe very strongly today because I am here, that we have to put the voluntary sector more to the floor and fund it properly to provide that kind of whole person support, which often is lacking. It’s people with the greatest needs who are most at risk of falling between the gaps in the services.

“We want you to be properly supported by the public services that work with you and that they see you as a long-term equal partner when it comes to looking after people.”

Furthermore, Mr Burnham stressed that change is necessary at a national level as it is ‘vital for each individual to have health and stability’ to live.

He went on: “More than anything, I think that we need change nationally when it comes to these issues. Housing should be a human right enshrined in UK law because I don’t believe you can’t have good health or a good family life, or stability in your relationships unless housing ceases to be your day-to-day worry.

“If your housing is not there, I don’t see how you’ve got anything else and I don’t see how we’ve allowed this situation to develop in this country where some people are denied that basic fundamental of life, that foundation on which everything else is built.”

WHAG is also involved in a range of projects that involve specialist services for ethnic minority clients, support for men who are or have been victims of domestic abuse as well as training, workshops and refuge services.

During the event, Hazel Waddington, the chair of WHAG, gave a small speech in which she shared a survivor story of a woman who had suffered from domestic abuse.

“None of this would be possible without contribution from our staff, our volunteers, supporters, partners, and also my fellow trustees. Together, we support women and families that fall victims of domestic abuse.”

The charity also introduced UP, a community-interest company set up to support WHAG, which provides training to schools, provides adult training and accreditation.

Ruth Tunnicliffe, the business development manager at UP, elaborated on the aims of the organisation: “We work with educational services, corporate businesses and schools to deliver positive relationship training within the workplace.

The organisation emerged from WHAG a few years ago but is a separate entity.

UP aims to raise awareness and provide training for people to be able to identify what a healthy relationship should look like, as well as identifying signs of abuse in a relationship.

“The program is set into three modules and it’s based around the healthy relationship. The emotional, the physical and psychological.”

In a short speech Kirsty Rhodes, the CEO of WHAG, highlighted that it is vital to contribute to smaller charities, as small amounts of money can make a difference and provide direct help towards bringing solutions within communities.