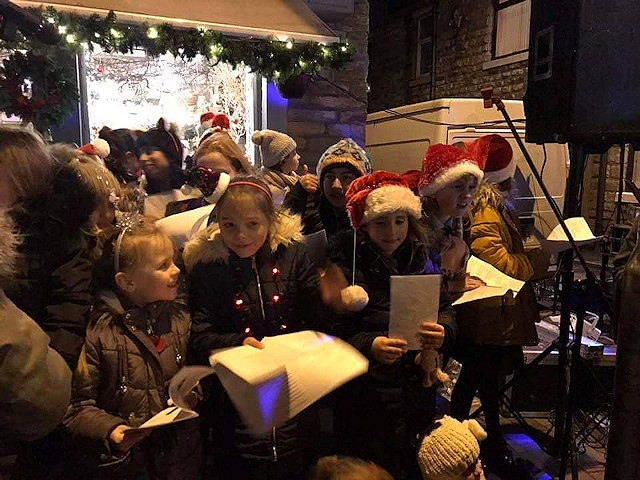 Norden village was packed out with over 1,500 people for the annual Christmas lights switch-on on Thursday (28 November).

The colourful lights were switched on by The Mayor of Rochdale, Councillor Billy Sheerin, Bee Inspired’s Pauline Cooper, and one of this year’s Men of Rochdale, Paul Ellison. They were joined by Rochdale AFC mascot Desmond the Dragon, assistant manager Lee Riley, and players, Rhys Norrington-Davies and Fabio Tavares.

A vibrant display of fireworks then took place, wowing the crowds.

Once again set for another special evening, the night was hosted by Dave Sweetmore, from Revolution Radio, and stewarded by Norden Environmental and Economic Village Association (NEEVA) volunteers.

With carol singing and a festive market, there were real treats for all, including late-night shopping and food from selected retailers including Garden of Eden and Denis Hope.

Father Christmas himself made a grand appearance, entering the village on a fittingly decorated float, supplied by John Roberts at Total Smart Solutions.

Children also had the chance to meet Father Christmas in Santa’s Grotto at Millionhairs, with a few treats for those on the ‘nice’ list.

The Grinch was also spotted skulking about Norden, before being put in his place by Father Christmas, whilst Elsa from Frozen paid a magical visit from Arendelle.

Mrs Claus was also present, taking a well-deserved holiday from Lapland before the Christmas rush.

Anne and Roger Tattersall from Tip Toes served black peas, and tea and coffee, as well as hosting an elf on the shelf raffle, and a lucky dip. All money raised by them was donated to the NSPCC, totalling £66.

Tina Pickering raised £287 on her sweet treats stall, with all proceeds to Macmillan.

Local public houses and bars were booming with Christmas cheer and festive markets filled the Norden Bowling & Social Club, with homemade chutney and jam from the Norden WI, plus Fairtrade goods and toiletries from the Body Shop, plus many more food and craft stalls.

A raffle with prizes also took place, including two Christmas hampers that were sponsored by the Co-op.

Mr Ellison, who organises the event each year as the chairman of NEEVA, said: “Our annual Christmas light switch-on is becoming bigger and better each year, so it’s safe to say that this year’s event was the best yet.

“Thanks goes to all of the NEEVA group, the true stars of the village, plus volunteers from Rochdale in Bloom, the council, Friends of Norden Jubilee Park, Dave Sweetmore, the Pickups of Norden, and Greater Manchester Police.”

Caroline Yates, the treasurer of NEEVA and manager of the bowling club, added: “It was my first year outside the bowling club this year, and able to attend the switch on. I couldn't believe how vibrant it was with people having such a good time.

“I was astonised to see the other side of the event with everyone enjoying the night.”