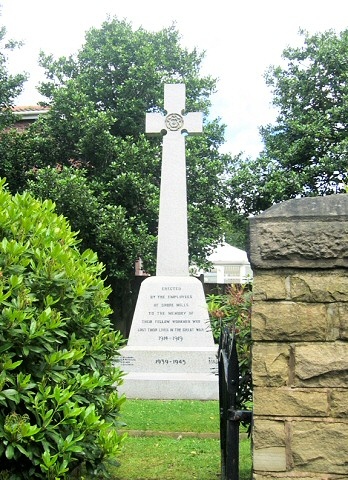 This list is of men whose 75 or 80 years anniversary occurs in December 2019.

Alfred was born on 27 October 1916, the son of Alexander and Beatrice Ann Clark (nee Taylor), of Littleborough. In 1939, his parents were living at 15 Welbeck Avenue with his younger sister, Freda, and all three worked in the cotton trade.

Alfred, who married Elsie Hartley in Littleborough on 8 October 1939, was also employed as a ring jobber at Clegg’s Shore Mill. Elsie was a cotton worker and they lived at 10 Turf House, Shore. Alfred joined the army in June 1940 and went abroad in April 1943.

At the time of his death, Alfred and Elsie had a 3-year-old daughter called Jean. The Rochdale Observers of the 16 and 23 December 1944 carried details about Alfred, as well as sentiments and a thank you from his wife and daughter and sisters Harriet, Barbara, May and Freda and their families.

Rennie was born in Nelson on 16 June 1910 and at the time of the 1911 census, the family - Arthur (a grocer) and Maud - were living at 28 Camden Street, Nelson together with Rennie and Alice Maud Reece, their domestic servant.

In early 1932, Rennie married Dorothy Clarke in Durham. In 1939, they were registered as living at 47 Newall Street, Littleborough. Also living there was Winifred Clarke (presumably Maud’s sister) and child Arthur Clarke.

Prior to being called up in October 1940, Rennie was an agent for the Prudential Assurance Co Ltd.

He is buried in Jonkerbos War Cemetery, Netherlands, grave No 15 F5 and is remembered on Littleborough Cenotaph.

Thomas was born in Littleborough on 21 July 1905, the son of Harry and Mary Jane Barker. In 1911, the family lived at 124 Featherstall Road, Littleborough. His father was a stone mason for the council and his mother worked in the cotton industry.

Thomas married Ruby Brabbin on 23 April 1930 and at the time of the 1939 register, they lived at 161 Ashwood Villas, Todmorden Road, Littleborough together with their 5-year-old daughter Sheila, Thomas’s widowed mother and Ruby’s widowed mother.

Prior to joining the army mid-1941, Thomas was a newspaper compositor, working for Kemsley Newspapers Ltd, Manchester, and attended St Andrew's Church, as well as being a member of Littleborough Angling Club.

39-year-old Lance Corporal Barker T/283056,  282 Gen. Transport Coy., Royal Army Service Corps was killed in a traffic accident in France on 8 December 1944. Driver Kavanagh was based in Brussels at the time when an order came through to send a vehicle 300 miles past Paris and during the journey the accident occurred.