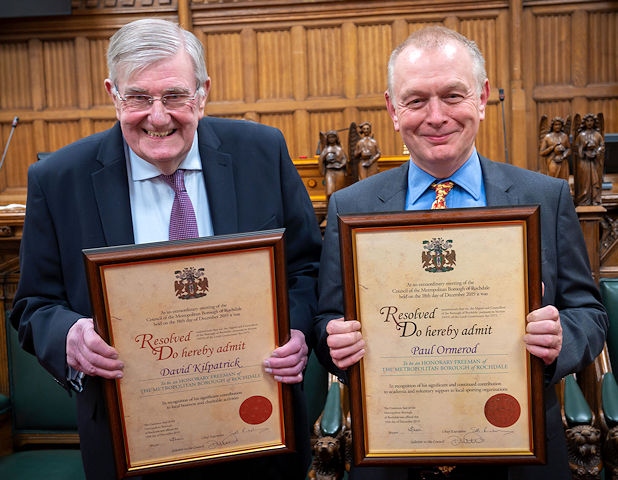 Six people who have made outstanding contributions to the borough of Rochdale have been honoured by the council.

Two local businessmen have been given the freedom of the borough, while four former councillors have been made Aldermen.

The civic honours were bestowed upon them at a meeting of the council in Rochdale Town Hall on Wednesday 18 December 2019.

David Kilpatrick, a former chairman of Rochdale AFC who spent 22 years in charge of the club, has been made a Freeman in recognition of his significant contribution to local business and charitable activities. He is recognised as one of the key figures involved in turning around the fortunes of the club in the 1980s.

He described receiving the accolade as 'a real privilege'.

Economist and author Paul Ormerod has also been made a Freeman of the borough in recognition of his significant and continued contribution to academia and voluntary support to local sporting organisations, including Rochdale Hornets Rugby League Club to whom he has been a generous benefactor.

He said: "It is a tremendous honour and I am extremely grateful."

Former mayoress Ann Stott has been made Honorary Alderman. She represented the Littleborough Lakeside ward between 2011 and 2019 and was nominated for her substantial voluntary and charitable works.

Ms Stott thanked the council and said she will continue with her good work as long as she can.

Former Wardle and West Littleborough councillor Robert Clegg OBE has been made Honorary Alderman for his significant contribution to local charities and the education sector. He is a long-time supporter of Springhill Hospice, and played a major role in raising the funds to have it built. He is also a former chief executive of a local NHS trust.

Speaking on the night, Mr Clegg said: “I'm so grateful. I'm a very happy man, thank you for this magnificent award."

Angela Coric has also been made Honorary Alderman. She served on the council between 1992 and 2010. As well as being mayor during 2004/05, Ms Coric was chair and vice chair of a number of council committees.

Ms Coric said: “It is a huge honour, and a privilege to serve the borough as a councillor.

"I'd like to thank Rochdale. My father came to his country in 1948 and I dedicate this award to him, my mother, the former council leader Alan Taylor and Paul Rowen. I am so proud."

Patricia Colclough, a former councillor for Balderstone and Kirkholt, was also made Honorary Alderman. She was born and raised in Rochdale and continues to contribute to the borough through school governorship and supports community interests through her work with Back O’th Moss Community Centre.