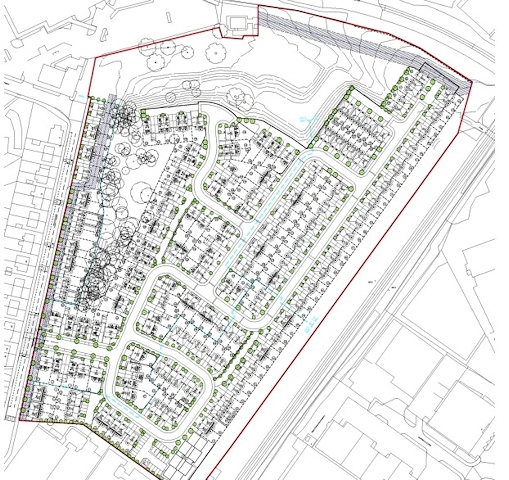 A planning application to transform the former Dunlop Cotton Mill site into a housing estate has been granted, subject to the completion of a legal agreement.

Proposals for an estate of 218 houses and block of 24 apartments on land off Royle Road, in Castleton, where Dunlop Cotton Mill once stood, were approved on Wednesday (18 December) by Rochdale council’s planning committee.

Dunlop Cotton Mill employed thousands of textile workers during its heyday but was largely demolished by 1979, following the decline of the industry.

It suffered a devastating fire in 1960 which took more than a week to put out – but within four months its output was back at 90 per cent of its previous level.

A report recommended approving Countryside Properties’ scheme – although it makes clear there has been wrangling over the amount the developer will pay towards providing extra school places in the area.

Concerns have also been raised over the quality of the properties and the possibility of future residents complaining about noise from nearby Royle Pennine Trading Estate.

Despite this, the officer’s report finds that the development – which features a mix of property types – would be of benefit to Castleton and the wider borough.

It states: “The proposed development would bring a large brownfield site back into use and deliver a large number of houses with a good tenure mix of private rental sector, open market housing and affordable housing.”

Countryside Properties says the scheme would create ‘an attractive, high quality’ area to live in.

Whilst the officer’s report agrees it makes ‘efficient use’ of the eight-hectare site, it finds that the houses are of ‘poor design’ and requested improvements have ‘not been forthcoming’.

However, it adds: “When weighed against the overall benefits of developing this long-standing derelict brownfield site with a good mix of housing tenures, it is not considered sufficient to warrant refusal of the application.”

The report also notes that the new estate – which includes more than 150 three and four-bedroom houses – ‘will increase pressure on local amenities and infrastructure’.

The council says there is an ‘urgent need for primary school places’ in Castleton – and is also forecasting a shortfall of places for secondary school-age children over the next few years.

A development of the size being proposed would ordinarily be liable for a maximum contribution of just over £1m.

However, the authority and Countryside Properties have been at odds over the financial ‘viability’ of the scheme and have come to a ‘compromise’ – a figure of just over £0.5m – based on the number of three and four-bedrooms.

The report adds: “It is important to note that the contribution of £511,280.41 is an offer made by the applicant, and it does not correspond with council’s review of the viability.

“However, a middle ground is considered to be a pragmatic stance given the difference in opinion with regards to viability.”