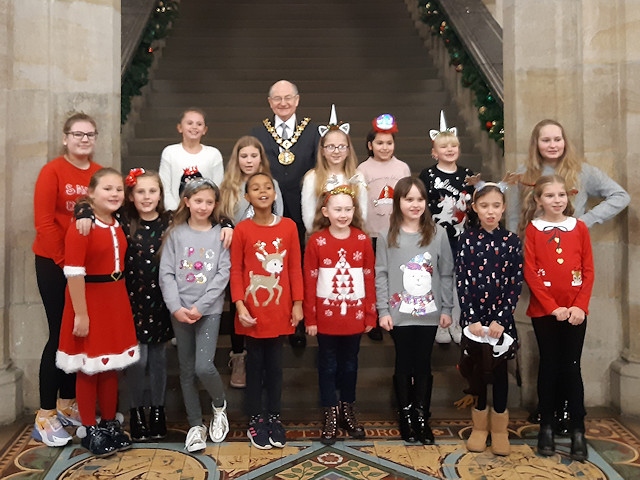 This weekly column from the Mayor of Rochdale, Councillor Billy Sheerin, is about the places he has been and the people he has met during the week commencing Monday 16 December to Sunday 22 December 2019.

This column is about the engagements I had the week before Christmas, so I had a lot of events all fitting to the Christmas theme.

For my first event on Monday 16 December, I went to Manchester Cathedral for my fourth carol service over the festive period. This time, it was for the Greater Manchester Police Christmas concert, which was super.

Around 1,000 packed out the cathedral for the force’s annual celebration, attended by both the public and VIPs. We all enjoyed a performance from Greater Manchester Police Band and special guests who played a range of carols and other festive music.

In 2018, Andy Burnham, the Mayor of Greater Manchester, asked the voluntary and community sector, public services and older people’s groups to help deliver more age-friendly neighbourhoods across Greater Manchester, entitled the ‘Age-Friendly Challenge’. These awards at Apna Ghar recognised the hard work that organisations across Rochdale have carried out to make their area a great place to grow older.

I awarded certificates as part of the celebration for community projects successfully completed.

The celebration was rounded off with a curry lunch, which was a surprising change from all the Christmas turkey!

Tuesday afternoon, children who did bag packing over Christmas for the Mayor’s Charity were rewarded with an afternoon tea in the Mayor’s Parlour. It was a party which I found most enjoyable as the group sang and danced and told stories and jokes. We all had such a laugh. In my early days I was a children’s entertainer, so we did some songs from my past such as ‘I am the music man’ which brought back many happy memories.

A big thank you to Doreen Stott, Dulcie Bolton and the girls who volunteered for making my day rather special and for raising over £1,000 for local charities and groups.

As part of the Mayor’s Charity events, Rochdale Curtain Theatre staged a performance of Steptoe and Son on Tuesday evening (17 December), which was played to a packed audience who fully appreciated the humour of the 1970s.

Cadets made a bucket collection at the end of the show under the direction of Wing Commander David Forbes for the Mayor’s Charity Appeal, raising over £1,000 for my appeals, which includes Springhill Hospice, M6 Theatre, Parkinson’s UK, Leukaemia UK, Shopmobility and Hydro Pool, plus other local charities.

John Hewer and Jeremy Smith from Hambledon Productions portrayed the characters Steptoe and Son on the night. Thank you to them for a wonderful evening.

I was invited back to Apna Ghar on Wednesday 18 December by Mohammed Sarwar for an Arts for Dementia event aimed at patients, carers and members of the public who could find out about dementia support services, employment and social prescribing.

I did a speech on dementia; the current statistics of people over 65 having a 1 in 3 chance of suffering from one type of dementia or another is absolutely frightening. For those aged 80+ it is a 50% chance. It’s vital that research is carried out immediately, not to cure it, which is impossible, but to delay its onset.

I had the privilege of presenting two local businessmen the freedom of the borough after a full council meeting on Wednesday (18 Dec), while four former councillors were made Aldermen. I was very proud to preside over the installation; it was one of many highlights over my time as the mayor.

David Kilpatrick and Paul Ormerod were made Freemans, whilst Robert Clegg OBE, Ann Stott, Angela Coric and Patricia Colclough were made Honorary Aldermen.

I was invited to Tricia Hornby’s retirement party on Thursday 19 December, held in the Clock Tower Dining Room in the Town Hall. Tricia was CEO of Rochdale Mind for many years and I was privileged to work with her on the Rochdale Borough Safeguarding Adult Board (RBSAB) which helps to protect adults in our area from abuse and neglect. The RBSAB is responsible for co-ordinating multi agencies in the statutory and non-statutory sectors and has a collective responsibility that all agencies working with adults fully understand and undertake their safeguarding duty and responsibilities.

The party was also attended by councillor Jean Hornby and Tricia’s colleagues and family, who I entertained in the Mayor’s Parlour afterwards.

I wish Tricia all the very best for the future and a long and healthy retirement, which is well deserved.

I had a last-minute engagement after this at Rochdale Islamic Academy – Girls Division. I gave out awards at an Islamic Awards Evening, which I enjoyed. The evening was for students who attended the school up to Year 11 and had come back on the night to celebrate their GCSE results.

It was highlighted on the night that it is important to always remain a good person in your career path - success is only measured by who and what you are – and to look after those worse off than yourself.

Friday 20 December, I recorded a ‘Seasonal Greeting from the Mayor’ for the Blind Welfare’s Rochdale Talking Newspaper. Bernard Thompson is one member of the Talking Newspaper, who has been recording news for the blind on audio tapes for many, many years. His dedication is amazing. Bernard's wife, Pauline Thompson and Rita Petty are also two amazing ladies.

It was a wonderful experience for me to be here last year as the deputy mayor, and it was wonderful again this year. I understand that I am the first Mayor to have done the Christmas greetings twice.

Rochdale Talking Newspaper distributes tapes of local news to over 90 service users in Rochdale borough, which are dispatched in special yellow padded envelopes free of charge by the post office and are eagerly looked forward to being received.

Sunday, I attended my last two Christmas carol concerts of the year – one at the Salvation Army Citadel Carol Service and the other at St Aidan’s Church in Castleton. These were my final events prior to Christmas, and I must say I am now a professional singer of all Christmas carol songs having attended so many carol services as the mayor (and enjoyed every one).

These events were a wonderful start to Christmas and a well-earned holiday period.