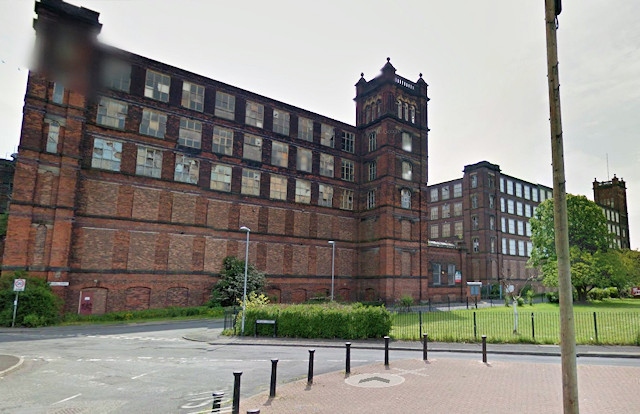 Mutual Mills in Heywood (mills one and two on Aspinall Street)

Plans to convert a Victorian cotton mill into hundreds of new flats were hailed as ‘the best thing to happen’ to Heywood in 10 years as the scheme was approved by councillors.

Grade II-listed Mutual Mills, on Aspinall Street, is to be transformed into nearly 300 apartments after the council’s planning committee voted to grant permission for the development.

The unanimous decision came despite one resident’s impassioned plea to refuse the application on the grounds of increased flood risk to people’s homes.

Speaking at a meeting of the council planning committee, vice-chair Councillor Phil Burke told members it was ‘a fantastic opportunity’ to save a historic building.

“And to save the building – and the features in the building is a very big thing – not just for Heywood but for the borough.”

Heywood councillor Peter Rush told the committee he understood people’s concerns over the impact on infrastructure and public services but said: “It is one of the best things – in this decade at least - that has happened to Heywood.”

He added: “All in all, we appreciate it’s going to be a fantastic thing for Heywood.”

However, that view was not shared by Michael Wyatt – who lives ‘very near the mill’ and was once flooded out of his home for two years, an experience he described as his ‘worst nightmare’.

Addressing councillors, he said the development would only exacerbate the problem, claiming the town does not have the drainage system to cope with so many new homes.

“I’m not trying to object to that mill, I have lived in Heywood all my life, it is an eyesore, there’s no getting round it. However, this is symptomatic of the council’s lack of understanding of flooding in Heywood,” he said.

Mr Wyatt added: “When you pass this, what you are saying is ‘we couldn’t give a monkey’s about flooding in Heywood; we need these 300 properties and we are going to build them’.”

However, Paul Moore – the council’s head of planning – insisted the issue of drainage had been considered and ‘comprehensively dealt with’, adding that it was covered by a condition set by the local authority.

He added that neither the Environment Agency or United Utilities had raised any objection to the plans.

Under the plans, mills one and two at the complex – which are both said to be in ‘reasonable’ condition –  would be converted into 298 flats.

Mill three is not included in the plans.

The basement and ground floor of the two mills would be converted into car and bicycle parking spaces, while on the upper floors, 237 single bed and 56 two bed flats would be created.

Some modern extensions to the complex, such as a bridge joining the mills and an office block would also be demolished.

Jeremy Good, director of ELG planning, which represents applicant Mandale Homes Ltd, said the scheme would ensure the viability of ‘valuable buildings’ and contribute towards the council’s housing supply target.