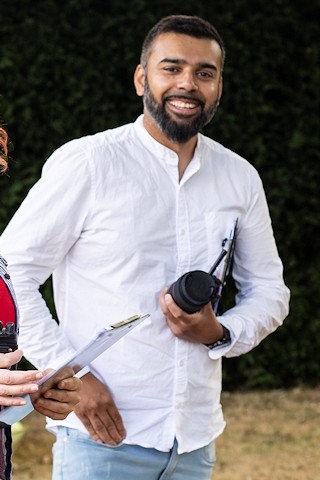 Film director Oz Arshad has done his bit to help the coronavirus pandemic in Rochdale by producing a video for local care homes showing how to put on and take off crucial PPE (personal protection equipment).

Oz and his company Cousin Films produced the six minute film which shows how to put on and take off aprons, gloves, face masks and goggles and it has since been sent to instruct staff in the 40 care homes across Heywood, Middleton and Rochdale. The local video supplements the information and guidance sent out nationally.

Alison Kelly, Head of Quality and Safeguarding/Deputy Executive Nurse appeared in the film and said: “We are very grateful that Oz offered to step in to create the film which became necessary when we realised that we could not attend each care home to show the staff how to put on and take off the PPE safely in person.

“His quick turnaround of the video whilst maintaining social distancing measures are testament to his professionalism and we can’t thank him enough for his involvement in this project.”

Oz said: “I am not a keyworker nor do I work for the NHS, but I still wanted to use my skills, filmmaking, to help the NHS as they're doing a sterling job for the nation during this pandemic.”

Oz developed his love of filmmaking during a decade-long career as a high school teacher. He is self-taught.

He was hired to write and direct a rom-com feature film on assignment for a small independent studio based in Yorkshire. ‘Finding Fatimah’ was released in 2017 and distributed by ICON Film Distribution. Oz completed his first drama short, ‘Curfew’ in 2018 which was funded through the National Film and Television School’s Diverse Directors workshop in association with EON Productions.

In 2020, he is in post-production of a feature documentary ‘Is this Love?’ which he directed and edited. His second short ‘Expiation’ funded by BFI is going into production in summer 2020. He also has two further shorts, his first on spec feature and a TV series in development.