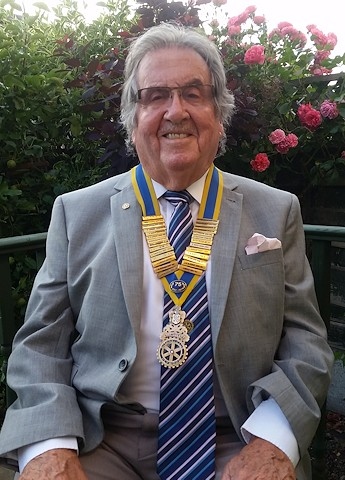 Councillor Peter Rush became the new President of The Rotary Club of Heywood on Wednesday 24 June.

In his 34 years of service to the club, this is the second time Mr Rush has been elected as President.

Mr Rush has been a councillor for North Heywood ward for over 16 years and is the current chair of Heywood Township Committee. He was the chairman of Rochdale Hornets between 2017 and 2019 and his association with the local rugby team covers over six decades, starting with his days as a player.

Celebrating through an online Zoom meeting with Rotary members and the past president, Rotarian Richard Slater, Mr Rush was honoured to receive the presidential chains from his wife, Monica, in a small ceremony at home.

The Rotary Club of Heywood have been working to support Little Monkeys throughout the year and the two even joined forces throughout lockdown to work on the frontline, with rotary members collecting useful items for the charity including children’s clothing. Established by Dr Michael Taylor, Little Monkeys charity works alongside social, health and welfare professionals in Heywood to help alleviate the needs of local disadvantaged children.

Back in September 2019, Mr Rush invited the Mayor of Rochdale, Councillor Billy Sheerin, to the Angela Bird Charity facilities, located at the former Taylor Street Clinic. The charity was set up in Heywood in 2011 by the sister of Angela Bird, who wanted to help people step forward after bereavement.

Looking forward to a successful and happy year in office, Mr Rush said: “The last time I was President was 2005, which was very special to me as this was also the Rotary Centenary Year.

“I am so proud of the work that The Rotary Club of Heywood are doing in the town and how the club has also brought ladies into the front when traditionally Rotary is all male. It is so pleasing to see that this unity has been introduced to the club.

“Rotary are keeping the community at heart, as we always have, even throughout this horrible epidemic we are going through. I want to highlight that Rotary help is still always available to anyone that needs it. We will always support the people of Heywood.

"The club has been keeping together on Whatsapp, taking part in regular quizzes together. Hopefully we can be successful in our regular outings later in the year and host our Christmas party, to build up rotary and community spirit.

“I am looking forward to a very, very good year.”

The Rotary Club of Heywood was established in 1933 and is always looking to welcome new members, both male and female.