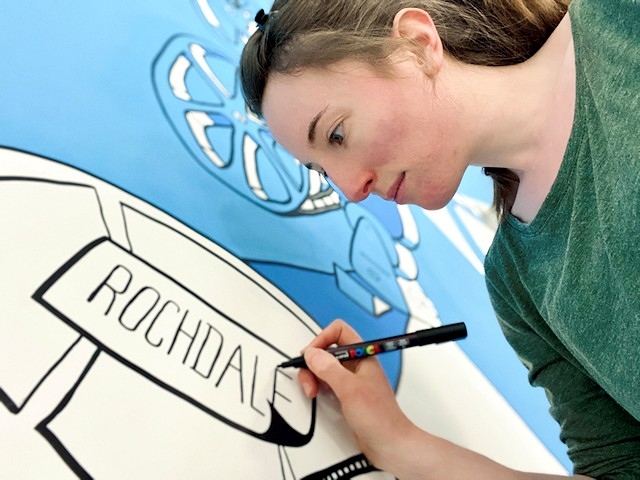 A hand painted mural stretching over 35 metres of wall will be unveiled at Rochdale’s Reel Cinema on Saturday (4 July), following the gradual re-opening of leisure facilities across the country.

Local artist ‘Doodlher’ put hundreds of hours of work into creating the Rochdale painting that stretches over two floors in the new leisure block -  home to both Reel Cinema (open 4 July) and Hollywood Bowl’s Puttstars (opening date not yet confirmed).

The artist, real name Victoria Whitaker, was first approached back in October 2019 when Genr8, one of the partners delivering the new Riverside development, asked if she designed murals. Not known to decline a local painting opportunity, Doodlher jumped at the chance to create her biggest doodle yet.

The mural, which highlights the main 'fun things' at the development, has a number of hidden film references and even features the famous King Kong gorilla holding a yellow Metrolink tram whilst balancing on the clock tower of Rochdale's very own town hall.

It extends from the lobby entrance, up the escalators, around the corner, and then down a corridor to the bottom of the cinema steps.

A trailing film tape guides you up the stairs to the projector room, and into the cinema where, at that point, the adjacent wall is a movie around 15 metres long being watched by the popcorn-hungry crowd.

Victoria said: “The mural is a journey, with a beginning, middle, and an end. I approached the artwork like a storyboard, and I wanted to make sure everything remained connected in some way – and that’s how the film tape came to be a core part of the mural’s design. 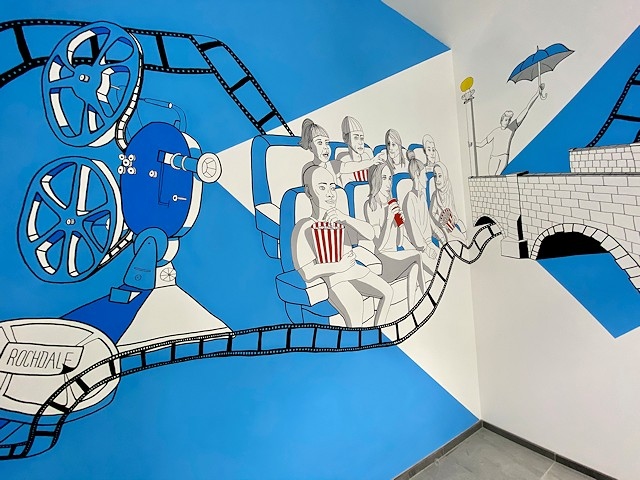 "The setting is, of course, Rochdale. It was very important to me right from the start to feature local references. Without them you could be standing in any lobby, in any part of the world, but I wanted people to recognise that this place belongs to Rochdale.

“I was actually working on another mural in Bombay Brew at the time I got a call from Genr8 who said they were looking for someone to decorate a space in the new development. Next thing I knew, I found myself in steel toe-capped boots, high vis, and a safety helmet at a building site.

“It was exciting as it was such a big blank canvas and I’ve never painted something that big. I usually work on A4 size, but I had my painting assistant (my husband) to help."

Speaking of the mural process, she added: “It was very lengthy. The first stage was to create all the scenes on paper as when I’m standing in front of a big wall with a pen, it feels much better knowing exactly what I’m drawing.

“I then digitised all the sketches to arrange them scene-by-scene and build the complete mural design. Scale was very important, I had to make sure everything was measured out perfectly. There would be nothing worse than getting to the last few metres of wall and running out of space!

“The final process was getting it on the wall, which took about three weeks, using a projector to draw the outlines before actually painting."

An artist and illustrator based in Rochdale for the past seven years after moving from Rishworth, Doodlher is becoming a well-known name locally for her murals around the town centre, which she describes as a ‘Doodlher hotspot’.

The Duke of Wellington was the first mural she painted on the side of the old Wellington Hotel building, now Bombay Brew, at the bottom of Drake Street. An interior painting of a 'Crusader vessel' at Bombay Brew followed, before a dinosaur with luscious locks was painted on the window of Greg Couzens salon to celebrate the arrival of Dippy the dinosaur.

“I love going off a white canvas, hearing ideas and then translating those ideas into a design,” finished Doodlher.