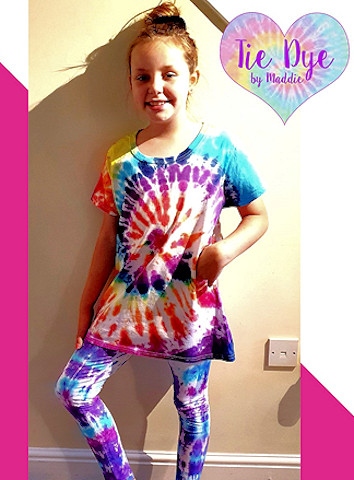 9-year-old Maddie Nixon from Norden has become a young entrepreneur after setting up her very own tie-dyeing business, despite the current pandemic.

Using a process of tying parts of a piece of clothing or garment to shield it from coloured dyes that create different designs and patterns, ‘Tie Dye by Maddie’ was set up in July after the announcement that face coverings will be mandatory when visiting shops and supermarkets.

The idea of tie-dyeing came to Maddie after she went on the video-sharing social network, TikTok, which featured DIY tie-dye at home videos.

With the help of her mum, Jo Nixon, Maddie created a Facebook page for her new venture and received over 40 orders in the first two days.

Jo said: “I know a lot of kids that don’t like to wear the face masks, but Maddie encourages the children to want to wear them as they’re funky!

“Maddie loves it - she has always wanted a little business like me and has always been creative. She came up with the idea herself and I run the Facebook page for her - she asks every single morning if she has any new orders.

“Not only has she been tie-dying masks, but we have also been busy with t-shirts, vests, leggings, tote bags, bibs, baby grows, shorts and tracksuits, offering both adult and kid’s sizes. Maddie’s sister works at Rochdale Infirmary, so she wears her mask 24/7.

Maddie’s mum concluded: “We are so proud of her and how she is helping out, especially in the current times. It’s also a good life lesson for her having this little business as it’s teaching her the value of money and that everything costs something; whatever comes in, some always comes back out. But she is excited to be earning and buy herself a little treat!”