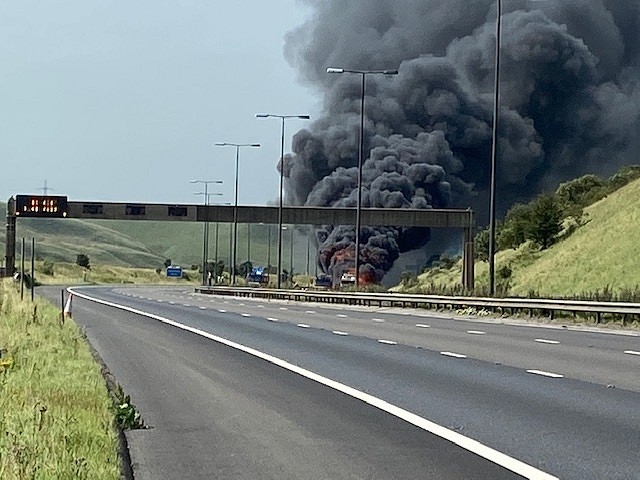 A lorry fire on M62 caused lengthy delays for motorists

A huge lorry fire on the eastbound carriageway of the M62 caused 5 mile tailbacks today (Monday 10 August) and the motorway was closed in both directions whilst the fire was dealt with by emergency services.

The fire started at around 11.30am just after junction 21, Milnrow and the resulting traffic caused major queues on surrounding roads. There are still delays to eastbound traffic on the motorway as only two lanes have been reopened eastbound between junctions 21 and 22 (as at 3.30pm).

Traffic in Rochdale has also been affected with Halifax Road, St Mary's Gate and Manchester Road all backed up.

Highways England were recommending drivers leave the M62 at junction 21, Milnrow and follow a diversion through Newhey and Denshaw to rejoin the motorway at junction 22, Rishworth Moor, which caused queues in Milnrow and Newhey.

The westbound carriageway between junction 22 and junction 21 reopened at around 3pm and traffic is now reported to be flowing normally in this direction.

🚒 Our crews are currently dealing with a lorry fire on the M62 between J21 and J22.

❌ The road is currently closed in both directions.

⚠️ Please avoid the area while our crews respond to this incident.