You are Here: Home » News » News Headlines » ‘I’m surprised how ignorant some people are’ – Councillor speaks out on coronavirus racism 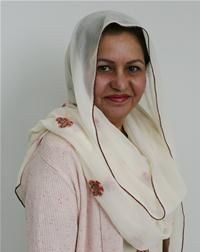 A councillor who moved to Rochdale from Pakistan 16 years ago says she has ‘never seen anything like’ the racism directed at the town’s BAME communities during the coronavirus pandemic.

The authority last week sent a clear message that any discrimination towards its staff and elected members would be reported to ‘the ‘relevant authority or social media platform’.

Councillor Zaheer, who represents Milkstone and Deeplish, says she has been shocked by some of the responses she has had from members of the public.

“On social media you put a post up and, even if it’s information the government is providing, then you go through the comments and you are surprised how ignorant some people are,” she said.

“Most of the time I don’t engage in conversation with those people, there’s no point doing that. But the important thing is it doesn’t stop you providing information to other people who might be interested in following the guidelines.

“I moved to this country in 2004, I used to see people complain about individuals – that kind of racism – but I have never seen anything like this, where whole communities are being blamed for something that is not true.”

She adds that comments can range from blatant racism to more think veiled attacks.

“Sometimes it’s clearly abusive – they say, ‘these people are responsible’ and things like that – and sometimes it’s hidden, people being sarcastic,” she said.

The Labour councillor – who speaks several languages – has also noticed a change in the way some people interact with members of the BAME community.

She said: “They don’t say it from their mouth, but their body language signals to you that this is the case.

“You can’t prove it, but somebody is treating you in a different manner. There are different types of racism present in the community at the moment.”

Councillor Zaheeer, who was elected in 2014, says that racist attitudes hit the younger generation particularly hard – and can have a real impact on mental health.

“They feel they are born in this country, raised in this country – they don’t know where their ancestors have come from – and they are still being treated like that,” she said.

“You can be a positive person striving for your goals, working hard to get an education and a better job, and you see these kind of comments from other people and it diverts you from positivity to negativity.

“Frankly speaking, it worries me. I don’t know where it’s going to lead us to if we don’t collectively try to stop this.”

Councillor Zaheer, who worked at Tameside council and Springhill High School before becoming a councillor, says she has noticed a shift in attitudes over recent weeks.

Earlier in the crisis she said there had been sympathy after it emerged BAME communities had been disproportionately hit by the virus – in part because so many were in frontline jobs in the health care sectors and other essential sectors.

But the Kingsway-based councillor said a different tone had now become apparent – albeit from a vocal minority.

“A tiny amount of people seem like taking control of the whole situation. I feel as a country we need to take a collective approach to tackle this,” she said.

“We are getting out of Europe in a few weeks, we need to get ourselves on our two feet, otherwise it’s going to further divide us and create more problems for us.”

While Councillor Zaheer welcomes the council’s firm line on racism, she says the social media giants need to do more to stamp out the problem of online hate.

“When you try to encourage people to report it, people say ‘what’s the point’, nothing is going to happen,” she said.

“It’s just the tip of the iceberg, most people don’t report it. They need to do something before it becomes something more sinister.”

She continued: “You know that sometimes it gets out of hand if you don’t tackle them. It’s about time we have a zero-tolerance approach, everywhere – whether that’s individuals or social media institutions, to tackle this.”

However, despite her frustration, Councillor Zaheer – who is particularly passionate about helping women in the BAME community – is determined not to stop her working towards a better world.

Rochdale residents can report a hate crime by visiting: rochdale.gov.uk/hatecrime.