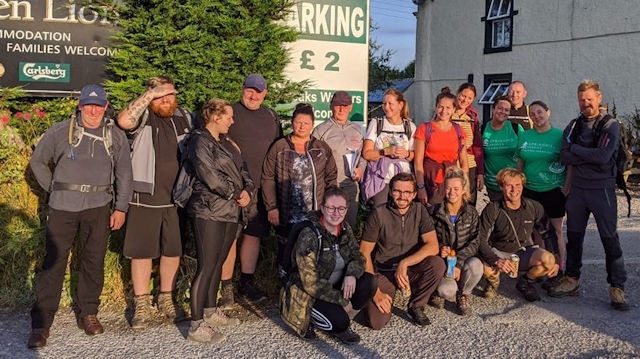 The day itself saw some fantastic teamwork from the 22 supporters

A group of individuals raised a fantastic £3,316 for Springhill Hospice by completing the Yorkshire Three Peaks Challenge.

The challenge itself involved a 39km circular trek across the iconic Yorkshire Three Peaks; Pen-y-Ghent, Whernside and Ingleborough in under 12 hours, with heights along the route reaching up to 1585m. The intrepid walkers took on the challenge to support the hospice, raising sponsorship money and spreading the word of the important work the hospice does.

The day saw some fantastic teamwork from the 22 supporters. The trekkers were led across the peaks by the experienced team from Mountain Edge who went out of their way to make sure that everyone who was taking part in the challenge was doing so in a safe manner.

The event was coordinated by Springhill’s Community Support Fundraiser, Barbara Lloyd, who said: “It was a real boost that this event was able to go ahead under current circumstances. We’d like to say a huge thank you to Gary Greenwood from Mountain Edge and his team who skilfully guided our trekkers across the peaks.

“It was such a success that we have set a date for next year’s three peaks challenge on Saturday 7 August 2021."