You are Here: Home » News » News Headlines » Man arrested on suspicion of murder after death of man in Rochdale 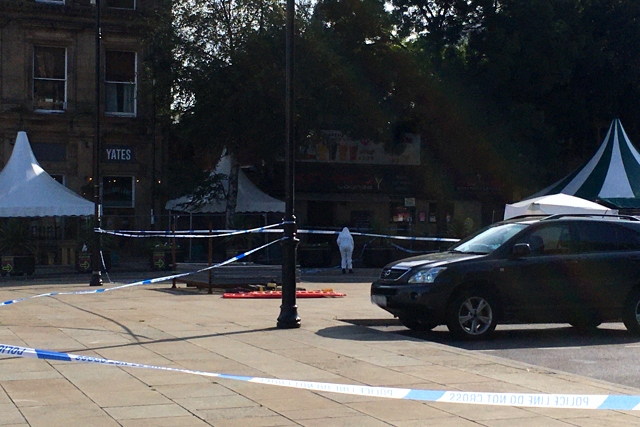 The scene on Packer Street

A man has been arrested on suspicion of murder, following the death of a man in Rochdale on Sunday morning (20 September).

At around 3.10am on Sunday 20 September 2020, police were called by the ambulance service responding to reports that a man was unconscious in a car park off The Esplanade, near Yates.

Officers attended and, despite the best efforts of paramedics, the man in his 30s was sadly pronounced dead at the scene. Enquiries are ongoing to identify and inform his next of kin.

Detectives have, so far, established that the victim was assaulted following a conversation with three men. He was left lying in the road. The men left the scene, walking towards Rochdale Memorial Gardens.

A short time later, the victim was hit by a passing vehicle. The driver of the vehicle stopped at the scene and is continuing to assist officers with enquiries.

A 22-year-old man has been arrested on suspicion of murder. He remains in police custody for questioning.

Detective Chief Inspector Liz Hopkinson, of GMP's Major Incident Team, said: "This incident resulted in the loss of a man's life, which will be devastating for his loved ones. We are still working to inform the victim's next of kin so he can be formally identified. Specialist officers are ready to support them through this process and beyond.

"One man is in custody but our investigation is ongoing. Although we have lines of enquiry to follow, we would still ask anyone with information which may assist us to share that information with us directly or via Crimestoppers anonymously. This incident happened as a number of licensed premises in the town centre were closing for the night so it is likely members of the public saw or heard something which is relevant.

"We know people in Rochdale are concerned by what has happened but I would like to reassure them that we are committed to establishing the full circumstances and ensuring anyone responsible for committing a criminal offence is identified and faces justice. Extra officers will be in the area this week so anyone with concerns can talk to them."