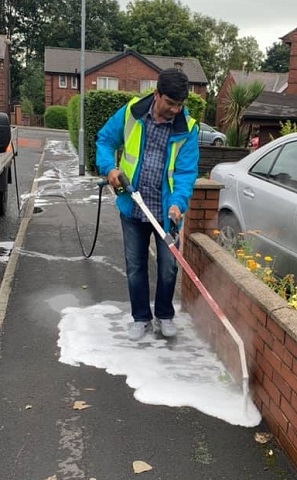 Councillor Faisal Rana with the Foamstream

Rochdale Council is trialling a new environmentally friendly way to get rid of weeds and moss from footpaths, using nothing more than hot water and a herbicide-free biodegradable foam.

The Foamstream solution is created from natural plant oils and sugars, and is used for controlling unwanted vegetation including weeds, moss and algae. Its patented low-pressure process combines heat with the foam, making it safe for use around people, animals and delicate environments. It can also be used for outdoor cleaning tasks like removing chewing gum, power washing and sanitisation.

The new Foamstream was put through its paces by local councillor Faisal Rana who joined council workmen for the day.

He said: "It's so easy to use. You just blast the weeds with the foam gun and it kills the weeds. It's especially good at getting rid of moss on the pavement that can be quite slippery and dangerous underfoot for pedestrians.

"The idea is quite simple. You just direct the gun to the weeds and hot water kills them. It puts a foam layer on top of the water to keep it hotter for longer giving it a much better success rate.”

Councillor Neil Emmott, Rochdale Council's cabinet member for the environment, said: "The safety of our staff and residents is our overriding concern. We are forever improving the way we work and removing the use of harmful chemicals as far as we can.

"The Foamstream is a completely environmentally- friendly and herbicide-free method of weed control. It's safe for our staff to use and for pedestrians and pets.

"All councils have been struggling to find an effective way of removing weeds and moss since the EU banned most pesticides and weedkillers several years ago for safety reasons.”

The treatment most widely used to replace the pesticides is the controversial herbicide, glyphosate, which is now being called into question over its safety following a number of court cases in America.

The pesticide, the key ingredient in the world’s bestselling weedkiller, Roundup, was reauthorised on a five-year-lease by the EU in 2017, despite 1.3 million people signing a petition for it to be banned.

Previously linked to cancer, glyphosate was deemed safe by the European Chemical Agency, which ruled “the available scientific evidence did not meet the criteria to classify glyphosate as a carcinogen, as a mutagen or as toxic for reproduction.”

A classification that glyphosate causes serious eye damage and is toxic to aquatic life does however remain in place.