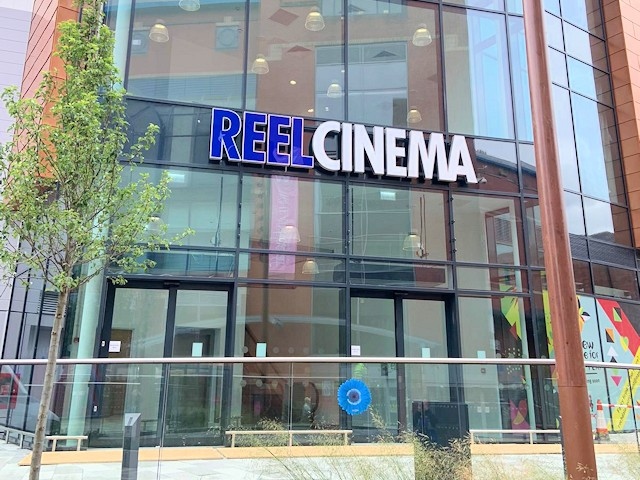 Rochdale’s Reel Cinema is one of 42 cinemas across England to receive a cash boost from the UK government.

Fourteen Reel Cinemas, including the one in Rochdale town centre at Riverside Walk, have received funding for health and safety equipment, from the government’s £1.57 billion Culture Recovery Fund, in the first awards made by the British Film Institute.

Cinemas are permitted to open in England so long as they follow the Covid-19 secure UK Cinema Association guidelines.

They are exempt from the 10pm curfew if a performance starts before 10pm, however no alcohol or food can be served after 10pm. Cinemas are able to continue to host more than six people in total but no one should mix in a group of greater than six.

Having implemented numerous Covid-19 safe measures, Rochdale Reel plans to remain open for as long as it can.

Manager Saeed Murtaza told Rochdale Online: “Reel Cinema is a cinema for the community, therefore we are here for the community of Rochdale to enjoy great films at a great price in a safe and comfortable environment.

“The cinema industry is currently facing a difficult period, at the moment. Every cinema in the country is making a loss. Every cinema could reduce its losses by closing rather than remaining open.

“However, where would that leave us? If the cinema industry dies, it takes thousands of jobs with it. More importantly, it destroys a fundamental social facility that has been part of our society for approaching one hundred years. It cannot be replaced and therefore must not be allowed to die.

“Reel Cinema will remain open for as long as it can to serve the community of Rochdale. We hope in the coming days and weeks people will come to our cinema to watch not only new films, but the classic films that made us all fall in love with the cinema experience.”

The cinema includes five ’premier lounge’ screens with custom, luxurious leather seating and the comfy, deluxe sofa in the ‘Reel lounge’. From its six screens and hand sanitiser located throughout, to ensuring seats are socially distanced from other cinema goers, the cinema has also introduced Perspex screens at tills, all staff wear masks or visors and all customers are offered a free mask.

Reel is cleaned daily and between shows, using an enhanced anti-viral cleaning spray.

Cinemas are able to apply for safety grants, to help independent venues meet the additional costs of creating a safe and Covid-secure environment for staff and audiences, and business sustainability grants of up to £200,000 to help stabilise venues as they reopen.

The £30 million fund will remain open for applications until 30 October and support for cinemas making an application is available from the BFI.

To support the UK’s film industry at every point of the screen supply chain the government has also opened the application process for the Film and TV Production Restart Scheme to help productions get the cameras rolling.

Prices at Reel are as follows: