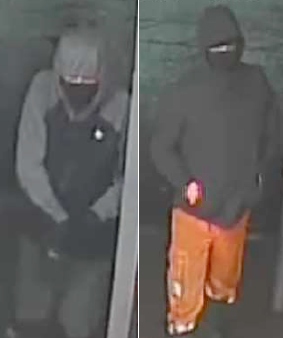 Officers were called to a report of an attempted armed robbery at Tesco Esso Express on York Street in Heywood at 8pm on Monday 5 October.

One man entered the store and threatened a member of staff with a suspected firearm and demanded money whilst another man held the automatic door to the store open.

The pair were then disturbed and made off from the scene empty-handed towards Adelaide Street in the direction of Aspinall Street.

Detective Inspector David Crewe, of GMP's Rochdale division, said: "This was an extremely distressing experience for the person behind the till who was simply doing their job.

"Though you can't see faces clearly, we're hoping that someone may have seen them in the area.

"Thankfully no one was hurt and nothing was taken and we're eager to bring those responsible to justice.