You are Here: Home » News » News Headlines » Flying the flag for inclusivity: Sign Along With Us runners-up of Britain’s Got Talent

Flying the flag for inclusivity: Sign Along With Us runners-up of Britain’s Got Talent 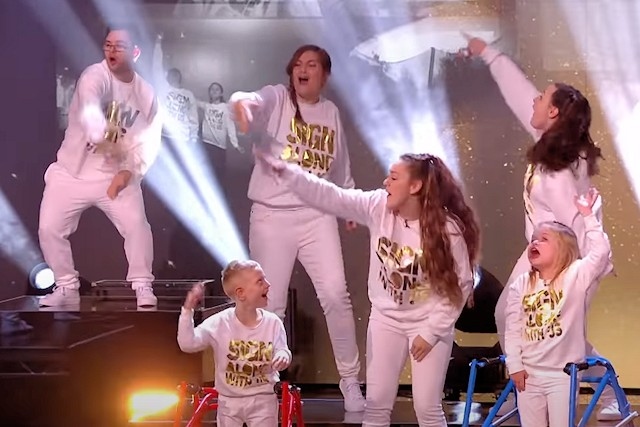 Sign language champions ‘Sign Along With Us’ have become local winners with their message of inclusivity, after finishing runners-up of the Britain’s Got Talent final on Saturday night (10 October).

Read more: Sign language champions ‘Sign Along With Us’ to appear in Britain's Got Talent semi-final tonightPublished: 19 September 2020

One of the ten final acts, Jade and Christian Kilduff, of Heywood, who started the group in 2019, were joined on the final stage by other local children and adults, backed by the Rochdale Music Service Youth Choir.

Determined to improve the lives of those with disabilities, Jade, of Heywood, set up the group ‘Sign Along With Us’ in January 2019, a daily sign-of-the-day video page which has become an internet sensation, teaching Makaton which she uses to communicate with Christian, five, who has cerebral palsy.

Makaton signs are based on the gestures used in BSL, but it is used in conjunction with speech and in English grammatical word order. Over 100,000 children and adults use Makaton symbols and signs, either as their main method of communication, or as a way to support speech.

Speaking before their slot, Jade said: “We hope that our group can be more understanding of differences.

“If the public chose us as their winner, it would mean everything to every member of our group. It would show that they can be who they want to be, stand tall and say ‘this is me’.”

Due to coronavirus restrictions, the full group of 70 weren’t on stage – but Jade, Christian and some of the group performed on stage, joined by the rest of the signers via a big screen.

Wearing matching white and gold ‘Sign Along With Us’ tracksuits, the group performed country pop power ballad ‘The Climb’, originally by Miley Cyrus for the 2009 film Hannah Montana: The Movie.

David Walliams’ golden buzzer act were met by standing ovations from judges, before David branded their performance as ‘magical’.

The group impressed judges at the auditions back in April with their emotional rendition of ‘This Is Me’ from The Greatest Showman, before being chosen as a final act by the public in the third semi-final.

Read more: Sign Along With Us move Britain’s Got Talent judges to tears as choir lands coveted golden buzzerPublished: 13 April 2020

Speaking after their performance, Jade said: “This wasn’t shown on TV, but I actually got really emotional on stage, I just broke down crying. I love my group so much and they have put endless amounts of effort into this. They all deserve this so much and I’m so incredibly proud of every single member of our group.

“Our story is so moving and the feeling I felt after our performance was something that will be with me for the rest of my life. Christian is a little miracle and is showing the world sign after sign how amazing he is. This is how much Sign Along With Us truly means to us all.”

Ella Chadwick, 13, of Whitworth, was one of the group chosen to perform on stage. Ella was born with a condition called Congenital Nephrotic Syndrome, which led to her kidneys failing before she was even a year old. She has undergone two kidney transplants in addition to countless procedures, therapies and operations.

Her mum, Karen Hughes, said: “Second place is amazing. All because of one girl with a love for her little brother and a passion to create a more inclusive world for everybody.

“Thank you to everyone who voted. Ella is so proud and we all celebrated like we won. She loves Sign Along With Us as it has helped her talk with Christian, who she loves so much."

10-year-old Lauren Norbury, of Heywood, who has a heart condition, Wolff-Parkinson White Syndrome (WPW), was one of the video performers. A congenital condition, WPW causes the heart to beat abnormally fast due to an extra electrical connection. It is usually treated through medication or surgery to destroy the extra connection.

She told Rochdale Online: “Sign Along With Us is important to me because it means everyone can be included even if they can’t speak or hear. Thank you to everyone who voted for us because it means that more people are aware of how important inclusivity is.

“I really enjoy being part of the group, and Jade is amazing for getting us on Britain’s Got Talent.”

In a second win for the borough, comedian and juggler Steve Royle, who trained with Skylight Circus Arts, placed third. Steve has also featured in the Peter Kay comedy Phoenix Nights Live show and has been performing for over 30 years.