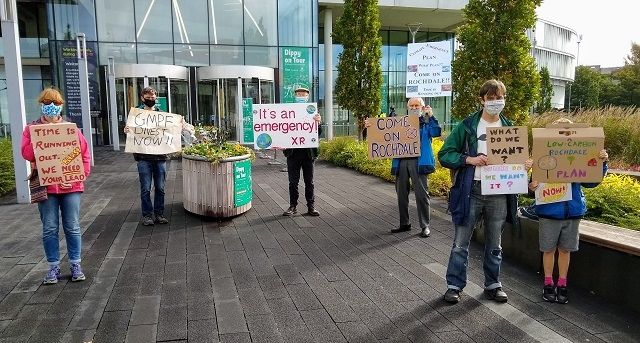 Members of Extinction Rebellion Rochdale and Friends of the Earth met outside the council offices in Rochdale town centre on Saturday (10 October) in a safely-organised protest to ask the council to quickly make progress on its climate plan.

Rochdale Borough Council declared a climate emergency on 17 July 2019, more than 450 days ago, whilst UK emissions have continued to rise since the agreements at the Paris conference in 2015.

Extinction Rebellion Rochdale feels action isn’t being taken soon enough, drawing on the image often used by Swedish climate activist Greta Thunberg, 17, to describe an emergency: “Our house is on fire” - as, when your house is on fire, you act without delay and you do everything to make sure people are safe.

The group gathered at the council offices wearing masks and observing social distancing.

Extinction Rebellion has three demands: the truth be told about the extent of the climate and ecological crisis; that carbon emissions are cut rapidly to zero by 2030; and the people of the borough are involved through a People's Assembly in shaping the government's response. In this way, people chosen at random will take the lead on responding to this emergency situation.

Jane Touil, one of the local activists, said: “We understand that these are very difficult times, with Covid-19 coming after years of cuts and austerity, but the climate emergency can’t wait. It is here and we need a plan which will help us all play our part in achieving a low carbon future.”

Revd Mark Coleman, another member of the group, said: "Carbon emissions have continued to increase and the rate of species loss has increased. Rochdale has suffered from terrible flooding in the recent past and this can only get worse unless we act. We call on our local politicians to make a plan and act on it quickly."

Jonathan Whitehead, a Friends of the Earth member from Littleborough, said: "We know what the solutions are; we need Rochdale Council to make a plan with strong measures to overcome the emergency, including investing in green affordable transport, funding huge scale insulation, and doubling tree cover in Rochdale.”

A spokesperson for the council responded: “We want to lead the way as a green authority and working towards a more sustainable future. We are committed to continue the plight to become carbon neutral and are working towards this goal by 2038.

“We are also working with businesses and residents to reach this same target by 2050 in line with the Mayor and the Government’s targets. We are continually growing our fleet of electric vehicles, which produce zero emissions and low running and maintenance costs.

“We also currently generate solar and wind power electricity in Rochdale and use energy-efficient street lights. The planting of wildflower borders and working with projects such as The City of Trees, alongside the council’s own plans for re-planting trees and plants, will see more than 2,000 trees planted in 2021 aiding air quality.

“We are in the process of appointing a new Climate Change and Sustainability Project Manager, who will lead on these initiatives and more, and we are also asking businesses to help to become more eco-friendly by signing a pledge.”

The pledge can be found at: www.rochdale.gov.uk/business-and-industry/Pages/eco-business-scheme-pledge.aspx

Extinction Rebellion is an international movement which wants the world’s governments to declare a 'climate and ecological emergency' and take immediate action to address climate change. Its origins can be traced to a group called Rising Up!, created in 2016 by a small group of activists.