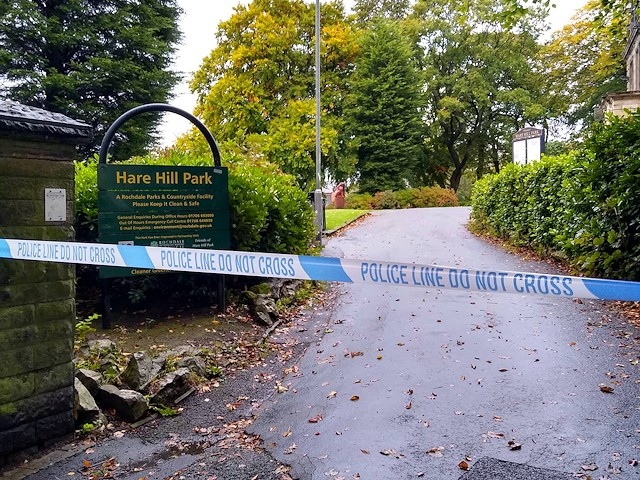 Police tape at Hare Hill Park the morning after the report

Police have closed the investigation into the sexual assault reported in Hare Hill Park last week.

It had been reported that a man had been approached by a second man in the park at around 1am on Thursday morning (8 October), who sexually assaulted him.

However, police are no longer looking for any persons in connection and have closed the investigation, as the force says 'no offences have been committed'.

In a statement, Greater Manchester Police said: “Following a thorough and diligent investigation, information has come to light that has confirmed no offences have been committed.

“Police are no longer looking for any persons in connection with this report and the investigation has now been closed. The initial informant is aware of this.

“GMP would like to thank the public for their patience due to any disruption caused and their response to this report. We would like to reassure the public there is no information to suggest there is any ongoing risk to members of the community.”

A socially distanced ‘midnight walk’ to show support, due to take place on Friday night (16 October), has been cancelled.

If you or someone you know has been raped or sexually assaulted, there is help and support available.

You can report it to Greater Manchester Police on 101, or alternatively people can refer themselves to St Mary's Sexual Assault Referral Centre on 0161 276 6515, whether or not you want make a police report.

Manchester Rape Crisis is a confidential support service run by women for women and girls who have been raped or sexually abused. Confidential helpline: 0161 273 4500.

Survivors Manchester offers support and counselling for adult male survivors of sexual abuse and rape, regardless of when the event happened. Contact 0161 236 2182.