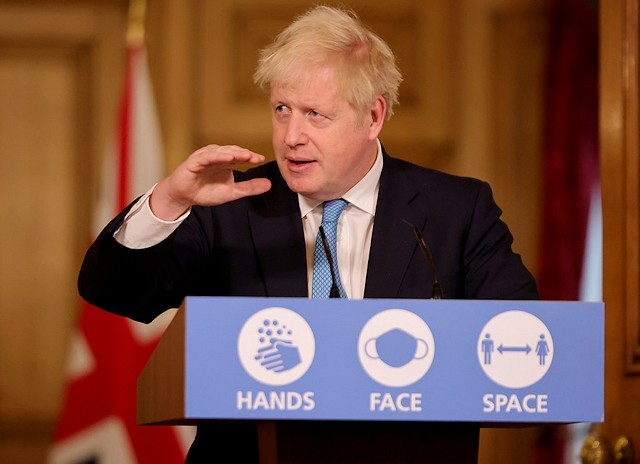 The new restrictions for Greater Manchester will come into force at 00.01 on Friday 23 October.

The announcement was made during a Downing Street news conference at 5pm today, with Mr Johnson being joined by Stephen Powis, the national medical director for NHS England and Prof Jonathan Van-Tam, one of England's deputy chief medical officers.

Tier 3 is the “very high alert" category under the most severe set of restrictions.

This will mean pubs and bars must close unless they are serving substantial meals, also betting shops, casinos and adult gaming centres and soft play centres will all close. People will be advised against travel in and out of the areas.

Restrictions on meeting other households indoors in any setting remain in place: you cannot meet in gardens under tier 3, but you can meet in public places such as parks, the countryside and forests in groups of up to six people (including children).

The restrictions will be reviewed each month. Schools, non-essential retail and universities will remain open in all tiers.

The move into tier 3 follows a battle between Greater Manchester leaders and the government over a financial support package for the region if tier 3 (very high alert level) restrictions were to be introduced.

Boris Johnson said: "Given the public health situation, I must now proceed with moving Greater Manchester to the very high alert level. Not to act would put Manchester’s NHS and the lives of many residents at risk.

"Despite the failure to reach an agreement, I hope the mayor and council leaders in Greater Manchester will work with us to implement these measures."

Greater Manchester Mayor Andy Burnham has called for a return to the original furlough scheme, which saw 80% of workers’ wages paid by government, a Self-Employed Income Support Scheme set at 80% of average monthly income and an improved compensation scheme for businesses directly or indirectly impacted based on the national scheme on rateable values.

Currently, for businesses that are unable to legally operate due to Covid-19 restrictions, the government will pay two thirds (67%) of each employees’ salary, up to £2,100 a month from 1 November 2020 under the Job Support Scheme (this replaces the original Coronavirus Job Retention Scheme which ends on 31 October). Under the Job Support Scheme, employers will have to cover National Insurance and pension contributions.

The government has also announced the Local Restrictions Support Grant which provides businesses forced to close with up to £3,000 per month depending on the size of their company and value of their property.

For the self-employed the Self-Employment Income Support Scheme (SEISS) has been extended to cover November 2020 to April 2021 and will include two grants covering three-month periods. However, the first of the extended grants will be worth just 20% of average monthly trading profits (compared to 80% when the scheme first opened in May), capped at £1,875 in total for the three-month period. HMRC has not published how much the second extended grant will be worth yet.

In a press conference in Manchester at 4pm, Andy Burnham said: “To accept any further restrictions in these circumstances would be certain to increase levels of poverty, homelessness and hardship.

“Let’s be clear who is most affected by a Tier 3 lockdown – it is people working in pubs, in bookies, driving taxis. People too often forgotten by those in power. But this city-region has never walked on by, and it never will.

“We’ve been clear throughout: we could only accept further restrictions with full financial support. We put forward a costed package of measures... but in particular, to support people on the lowest incomes, and people who are self-employed.

“This would cost £90m to the end of the financial. In negotiations with the Government we were prepared to reduce our request to £75 million, and we even were prepared to go even lower - £65 million as the absolute bare minimum.

"Those were the figures that we had: not what we wanted, what we needed. But the government refused to accept this, and at 2 o’clock today they walked away from negotiations.

“At no point today were we offered enough to protect the poorest people in our communities through the punishing reality of the winter to come. I am still willing to do a deal, but it cannot be on the terms that the Government offered today."

Mr Burnham added: "I don’t think it is right to ask people to go into a lockdown, to accept further changes within their lives, without supporting them through that and what it entails. It can’t be right to do that. I don’t believe we can proceed as a country on this basis through the pandemic - by grinding communities down through punishing financial negotiations.

“We need national unity, and that is why I now look to Parliament to intervene and make a judgement on a fair financial framework for Tier 3 lockdowns, because make no mistake: this was not just about Greater Manchester.”