You are Here: Home » News » News Headlines » Dolly the cat's rescue from a Littleborough canal gate

Dolly the cat's rescue from a Littleborough canal gate 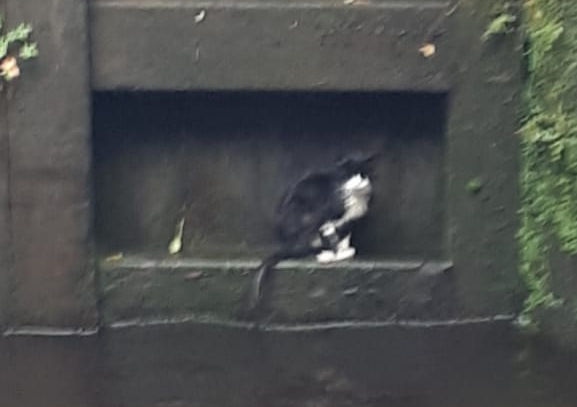 Dolly, before she was rescued

Dolly the cat used up one of her nine lives when she became stuck on a canal lock gate in Littleborough.

The 18-year-old cat first went missing on 27 October, before appearing above the canal three days later.

Black-and-white Dolly was discovered by a local dog walker, who wishes to remain anonymous.

He told Rochdale Online: “We were near lock 47 and my dog spotted the cat and froze. He wouldn’t move when I tried, so I followed his gaze and saw the cat on the gate. I believe she had been there for a couple of days.”

He then rang the RSPCA, which navigated a tricky rescue mission to retrieve Dolly from her precarious perch. His wife then shared photos via social media to try and - successfully - locate the cat's owner.

Posting online, her owner confirmed Dolly had been returned to her, sharing a few photos of Dolly curled up in a fluffy bed, catching up on some much-needed sleep after her stressful and dangerous ordeal, adding: “The RSPCA are heroes.”

David Canavan,vice-chair of trustees for the RSPCA's Rochdale branch, said: “Dolly is a lovely cat who found herself in a very dangerous position. I am delighted the RSCA was able to help and reunite her with her loving owner."

Dolly’s owner could not be directly reached for comment.