You are Here: Home » News » News Headlines » New book by local author reminisces about Rochdale high streets in the 80s and 90s 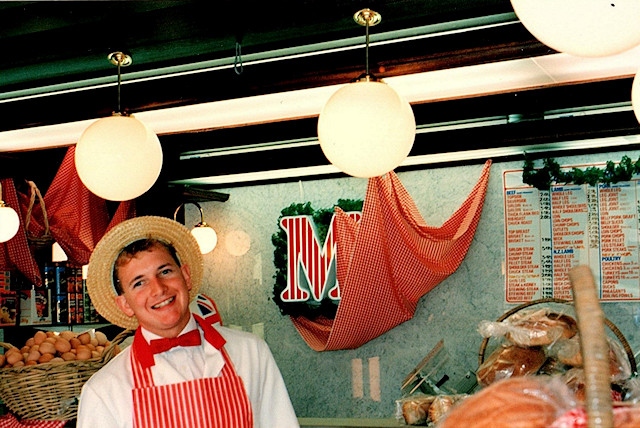 The book, entitled Butcher Boy, is John’s fourth book and is an autobiographical story of what it was like growing up and working for his well-known father, Raymond Matthews, in the town throughout the 80s and 90s.

Now living in Uppermill, Saddleworth, John said: “My dad was very well known as probably the most famous butcher in town. He established, ran, and was very proud of Matthews Butcher’s which ended up in a prime retail location on Yorkshire Street.

“I have written this book, which in essence chronicles a lost time in the town when the high street was absolutely thriving. The book is really for former customers of my dad’s business, of which there are thousands, who may find it fascinating to hear what it was like behind the counter working for a very ambitious dad, and also remember what those amazing shops were like.

“It’s about a time not so long ago when there weren't boarded-up shops on every high street, when Amazon was just the name of a river, a time when customers shopped locally and were treated like royalty. It is about a time when things were bustling, and young men were expected to do as their fathers wished – whether they wanted to or not.

Raymond Matthews had several shops over the years in Rochdale - on Yorkshire Street, Wet Rake, Oldham Road, Bury Road and Spotland Road - plus a bakery and a few other small enterprises.

After leaving the RAF and joining the Co-op, he served his apprenticeship as a butcher, starting his working life on Yorkshire Street with the Rochdale Pioneers and 20 years later, ended up there with his own shop.

Having been trading for some time, on 1 July 1970 Mr Matthews finally took the plunge and set up the registered business Raymond Matthews (Rochdale) Ltd - a company that would trade for 39 years.

Raymond’s son, John, now 54, began his career working for his late father at Matthews Butcher’s in Rochdale, but went on to become a researcher for broadcaster Jeremy Paxman and a film maker working with the likes of seven-time Formula One world champion Lewis Hamilton.

His company, Bigger Pictures Studios, sells productions in more than 50 countries across the globe.

He added: “The book is meant to be easy to read with short sentences and short chapters and the font is large, so those with poor eyesight will find it easier to read. It is a story for everyone - of a man who built a commercial empire and the price his family had to pay.

"Everyone knew who Raymond was. His butcher’s shops were all extremely busy and the reason was we all worked extremely hard to make sure people got high quality products and high-quality service. I still apply that thinking to anything I do, and I have yet to get the service my dad offered anywhere since.

“He was quite a retail and small business genius and I miss him very much.”

You can purchase your copy of the Butcher Boy book via the website: www.butcherboybook.com