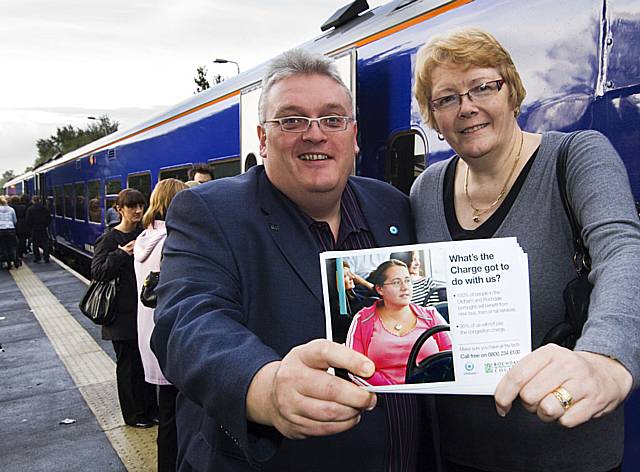 People in Rochdale have been urged to vote in the big ‘Congestion Charge’ referendum, which is to take place across Greater Manchester.

Politicians in the town today (Monday 8 September) launched an information campaign to spell out the importance of taking part in the December poll.

Residents are being urged to vote even if the weekday peak time charge may not affect them.

Although the referendum will essentially be seen by many as a single issue, the introduction of a Manchester road congestion charge, Councillors have argued that there is far more at stake.

The proposed weekday peak-time only charge is one part of a package that could see almost £3bn being spent on major public transport improvements across Greater Manchester.

The hope is that this programme will bring trams into the heart of Rochdale town centre, create a far better bus service, with more frequent services, earlier and later buses and far more integration. Improved rail facilities and better provision for cyclists are also proposed. A fleet of Yellow School buses will be introduced within Rochdale.

The campaign includes a series of posters spelling out the benefits to people in both Oldham and Rochdale, from the improvements proposed in the Transport Innovation Fund programme.

Councillor Sykes said: “We selected Mills Hill Station as the launch location for our campaign because it is precisely the type of facility that will be transformed as part of the improvements. The plan is to create up to 300 extra park and ride spaces at Mills Hill which will be welcome for commuters from both Rochdale and Oldham.

“Often it is standing room only on trains through Mills Hill and one of the proposals is to have longer trains to alleviate this and far better station facilities.

“We want to stress to people the importance for all of us to vote in the referendum. It is the biggest ever transport programme in the history of our borough so we want everyone to take part in this vital decision making process.”

Councillor Davidson said: “The proposals put forward would see 30 years worth of public transport investment all in one go, so it is an important issue for everyone in the Borough of Rochdale. We don’t want any local people to feel excluded from the process just because they do not commute every weekday into Manchester. Please find out how the proposals would affect you personally and then make up your own mind on the issue.”

Councillor Sykes added: “In the coming weeks, during the build-up to the referendum there will be an intensive debate. That is why we have also compiled a useful Q & A factsheet answering all of the questions people in Oldham and Rochdale are likely to raise. Our plea to our people is to look at the facts, look what is at stake, and vote according to your views based on solid facts.”