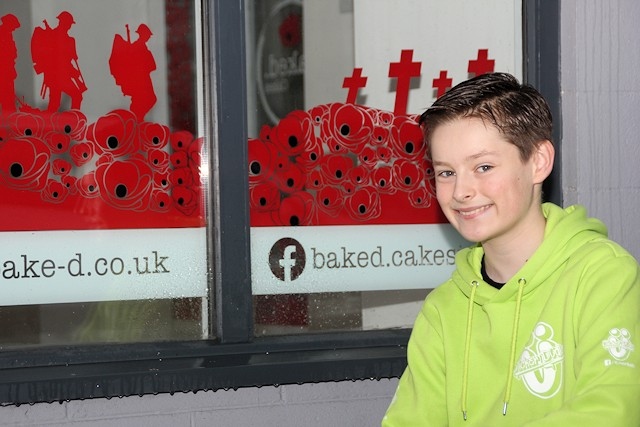 What started as a Scouting challenge led to 14-year-old Charlie Hastewell from 40th Rochdale Scouts raising more than £1,100 for charity.

The initial challenge set by Charlie's scout group, which meets in Syke, in the summer holidays, was to sell a football card and £20 went to the winner and £20 to the scout.

Charlie, from Whitworth, had to then invest the £20 to start a little business and, as his dad Stephen is a sign writer, he thought of creating bin stickers for wheelie bins.

Charlie said: “Dad was helping me do the stickers and I was taking the orders and delivering them. I had a basic design and people could customise it with what they wanted.”

Dad Stephen said: “Charlie had basic design skills and I taught him about colours, styles and fonts and then he was composing his own graphics.”

A student at Whitworth Community High School, Charlie has picked Design Technology as one of his GCSE subjects and one of his biggest challenges came when Danielle Almond of Baked Cakes in Bacup asked for a Remembrance display on her shop windows.

She said: “I had seen some of Charlie’s work on Facebook and asked if he could do something where poppies cascaded down the window a bit like the Tower of London poppies.

“It has been so well received, even though Remembrance has passed, I am leaving it up for people to enjoy.

“I have had people coming in to take photographs of the windows to send to their friends down south and one guy Gareth Jones, who does urban shoots in Manchester and has a following on Instagram, was photographing them.”

Charlie said: “In Scouts we would normally parade for Remembrance, but we were not allowed to do that, so to raise money I made poppies to go into people’s windows.”

His own unique poppy has cut outs to form petals and he used that initial design to make the poppies that now flow down the windows of Baked Cakes.

Charlie said: “I also created a Whitworth Pumpkin Hunt, which was my biggest fundraiser. I did it because children could not go trick or treating this year and they were getting bored.

“The fun trail got them out of their houses and got people looking for pumpkin stickers.”

The stickers were put in house windows and each had a number and a name and children had to collect as many names as they could to win a prize.

There were 131 pumpkins in Whitworth and 66 in Shawforth.

The pumpkin hunt raised £473.76 for Rochdale Moorland Children’s Home, the poppies raised £305 for The Royal British Legion Poppy Appeal and he also raised £300 for his Scout Troop and £60 for Cubs.