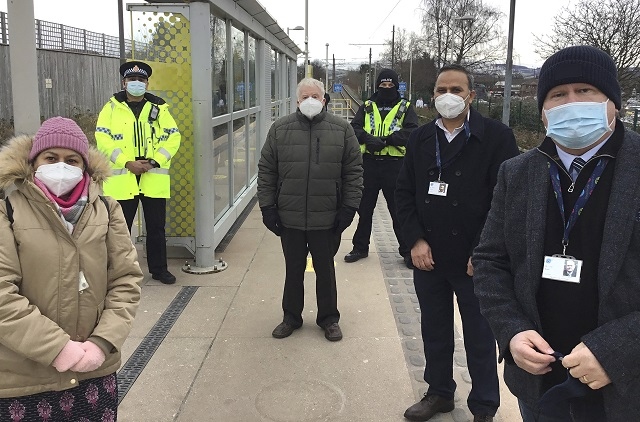 Over the coming weeks, officers from the Rochdale neighbourhood task force and Rochdale Council will be working alongside colleagues from GMP's Special Operations Branch and Transport Unit, as well as representatives from the British Transport Police, Metrolink and Greater Manchester's TravelSafe partnership to prevent anti-social behaviour, knife crime and fare-dodging.

Prevention methods which will be deployed during the month and throughout the year, as part of GMP's Operation Sycamore include; increased stop and searches on the Metrolink network and increased uniform and plain clothed patrols.

Andrew Fern, Rochdale's Neighbourhood Task Force Inspector, said: "Despite the challenges of the COVID-19 pandemic, we remain committed to ensuring Rochdale remains a safe place for people to live, work and visit, and this proactive partnership approach is key to achieving that.

"GMP is dedicated to taking knives and other dangerous weapons off our streets, and operations such as this have a long lasting positive effect as they prevent and detect crime, as well as helping to forge links with partners and the community which is important, as the police cannot tackle the issue alone.

"I would like to stress that we will not tolerate these type of behaviours, as not only are those involved upsetting and distressing other passengers and the wider community, they are also showing a total disregard of the latest COVID-19 restrictions.

"Abuse of any front line workers also won't be tolerated, as it's important that Metrolink staff can be confident that they are safe when challenging members of the public who haven't purchased a ticket or worn a face covering.

Councillor Phil Burke, Transport spokesperson for Rochdale, said: “You will see in February and throughout the year, a multi-agency approach of an increased presence in staff from all the different agencies involved in this operation to reassure the public using the Metrolink.

“We have had thousands of pounds invested in the Rochdale and Kingsway Business Park, and the aim of the operation taking place is to ensure to the public that we will crack down on any form of anti-social behaviour or fare evasion along this tram line robustly.

“We would like to thank all the agencies involved in supporting this operation."

This operation forms part of the work of the Greater Manchester Violence Reduction Unit, which is part of the wider approach to tackling violent crime across Greater Manchester. This includes making sure victims of violent crime get the right support, improving the criminal justice response to all forms of serious violence, working with schools to increase awareness of the consequences of getting involved in violent crime, identifying and working with young people at risk of violent crime, and developing a community-led approach to early intervention and prevention.

If you have concerns about someone you know or care about who is carrying or hiding a knife, or if you are aware that knives are being concealed in your community, call the Police on 101 or talk via LiveChat at www.gmp.police.uk