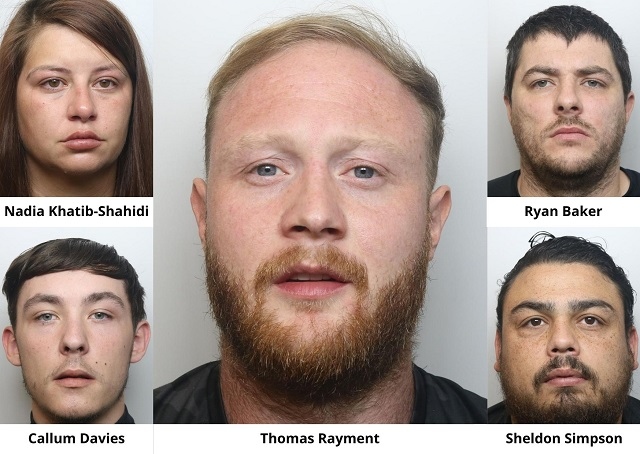 A county lines drug gang from Warrington, Rochdale and Cheetham Hill have been jailed for a combined total of more than 20 years.

The six – responsible for supplying cocaine and heroin with an estimated street value of over £140,000 in Warrington – were originally arrested during an early morning raid at addresses in Warrington, Rochdale and Cheetham Hill on Wednesday 27 May 2020 and charged the following day.

Five members of the county lines supply network known as ‘Titch’, including Sheldon Simpson from Rochdale, were sentenced on Thursday 17 December 2020 at Liverpool Crown Court.

The sixth and leading member Thomas Rayment was jailed for six years at a hearing at Liverpool Crown Court on Wednesday 17 February.

The operation saw gang members, led by Thomas Rayment, supply cocaine and heroin to drug users in Warrington during a six-month period from October 2019 and March 2020.

Over a series of months, officers from Cheshire Constabulary’s Serious and Organised Crime Unit investigated the gang, witnessing drug deals and monitoring telecoms.

The gang attempted to throw police off the scent by using graft mobile phones (on which drugs were advertised and orders taken) and regularly changing vehicles.

Over the six month period three different graft numbers were used, these phones were used to advertise drug sales by sending texts to users in Warrington. All of these phones were operated by Nadia Khatib-Shahidi who passed the details of orders on to street dealer Ryan Baker.

The drugs would then be transported to Baker’s property by Sheldon Simpson, of Rochdale, who also collected the cash from the sales.

Once being questioned by detectives Rayment claimed that he earned money from dog breeding however admitted trafficking cannabis at a later date.

The five other defendants pleaded guilty to conspiracy to supply heroin and cocaine.

They were sentenced to:

Detective Sergeant Adrian Priest said: “I welcome the sentence handed down by the courts today.

“Rayment thought he could get away with bringing his illegal enterprise to Warrington but thanks to the efforts of all involved, we were able to stop him in his tracks and protect the vulnerable in our society.

“We will continue in our fight against illegal drugs and do all we can to break the cycle of serious and organised crime.”