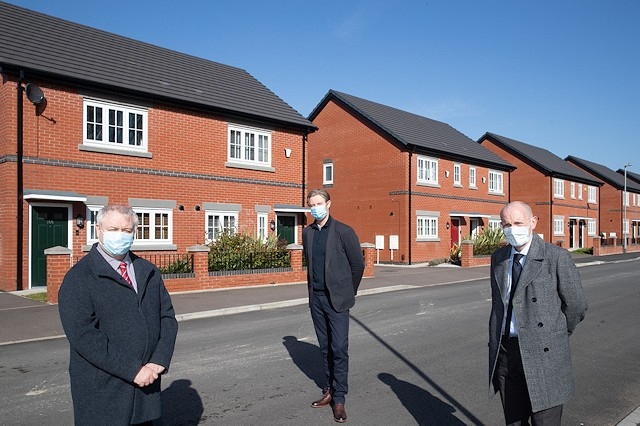 A two-acre brownfield site in Heywood has been transformed following an £8m redevelopment.

Russell Homes built 42 two and three bedroom properties on the previously derelict site at the junction of Cedar Avenue and Claybank Street on land acquired from Rochdale Borough Council.

The site was identified for housing as part of the authority’s bid to help drive the regeneration of the area, and attracted funding from Homes England and regional housing association Onward Homes.

All the properties are now occupied, with many now belonging to first time buyers who have moved to the area from elsewhere in Heywood and the wider Rochdale borough.

Priced from £120,000 to £130,000, 26 of the properties were sold on the open market by Russell Homes. The remaining were 16 taken by Onward Homes which provided six for shared ownership and 10 under Rent-to-Buy.

The 26 private sales were achieved within eight months, with 22 sold to first time buyers and 23 purchasers using the government-backed Help to Buy scheme.

Seven buyers have come from within Heywood itself, 12 from elsewhere in the Rochdale borough. Eleven were from out of the area including other parts of Manchester, the North West, and even London.

Bob Pleasance from Onward said: “The quality of the development is exactly what we’ve come to expect of Russell Homes, the properties are well designed and finished to a good specification and they have proved popular with our clients.

“We sold all the shared ownership within a week; there was a waiting list of very keen buyers, and the rented properties were snapped up very quickly too. The improvements brought by this development have really lifted the whole area.”

As part of the project, which attracted £500,000 in funding from Homes England, Russell Homes ensured that 85% of subcontractors working on the development came from within 20 miles of the site and most workers employed directly by the housebuilder lived within 10 miles of the site, while the majority of materials used in the build were also sourced through local manufacturers and suppliers.

Councillor Neil Emmott, Cabinet Member for Quality of Place at Rochdale Borough Council, said: “Development of brownfield sites is a big priority for us and that’s why we wanted to support this project to bring much needed, high quality, affordable homes to an area which was previously unused.

“Not only has this given people from Heywood and the wider borough an opportunity to get on the housing ladder, but it’s also lifted the whole area around the site and will provide an additional boost to Heywood town centre and its many businesses. The fact that local jobs have also been supported during this build is very important to us.”

Daniel Kershaw, Russell Homes director, added: “Cedar Gardens is fantastic example of how developers and local authorities can work together to bring benefits to the local area. This development saw us working closely with Rochdale Council, Onward and Homes England to regenerate a derelict site and create new houses that, it’s clear, are in high demand.

“I’m delighted with the response to the development and want to thank everyone who played a part in its success.”