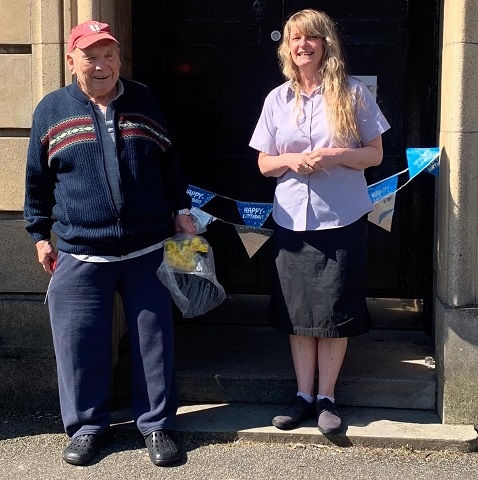 Castleton Leisure Centre has officially re-opened for use now further restrictions have ended – and who better to declare the pool open than its oldest swimmer, Harry Smith, on his 88th birthday?

Mr Smith, who turned 88 on Friday (16 April), cut a special banner declaring the pool re-open, before jumping into the water for a long-overdue swim.

The Castleton resident had been swimming up to 40 lengths before lockdown, and he is aiming to build up back to this.

“I’ve been swimming here for years,” Mr Smith, a former president of the Rochdale Cricket and Lacrosse Club, beamed. “As soon as I’m in the water, I don’t notice my arthritis, and I can move my arms.”

Mr Smith swam a total of 12 lengths at the 110-year-old baths before a special garden lunch with his youngest daughter and her son, who had travelled especially from Newcastle to see him.

He added: “My sport was always lacrosse; swimming is just a pastime. I’ve had a very good life; I travelled all over the world and I made some long-lasting friendships with the lacrosse team.”

The swimming pool has also benefitted from a new environmentally friendly and more economic heat recovery system, installed during the latest lockdown, which will reduce the pool’s carbon footprint by 61 tonnes a year.

The system has been paid for by Crewe Industrial, which runs the pool. Directors Gary Ellis and Nick Crewe said: “As part of the continuing improvement scheme at the Castleton Pool we have installed a heat recovery system. This takes the warm air that is released to the outside and extracts heat from it. This heat is then used to warm the fresh incoming air.

“The system requires no additional electricity and saves 38kW of energy, equivalent to switching off a large domestic gas boiler which was running 24/7. This has resulted in reducing our carbon footprint by 61 tonnes a year, saving an amazing 333 gigawatts of power every year as well.

“We had looked for some funding but this is made so hard to access. We instead dug deep into the pool’s financing and paid for it ourselves, for what we hope will be a worthy investment in the pool’s future and the planet’s.”

The former Castleton Baths re-opened its doors to the public under its new name – Castleton Health and Leisure Centre – in October 2017, after the pool’s long-term future was secured following a community asset transfer to local businessman Nick Crewe, who restored the baths to their former glory.

The ‘family pods’ – hiring a quarter of the pool out at a time – started last year will be staying, having proven a huge hit with the public.

The wellbeing side of the centre is currently undergoing refurbishment, but the Empowerment service is open.

Work on the anticipated hydrotherapy pool is also to begin imminently.