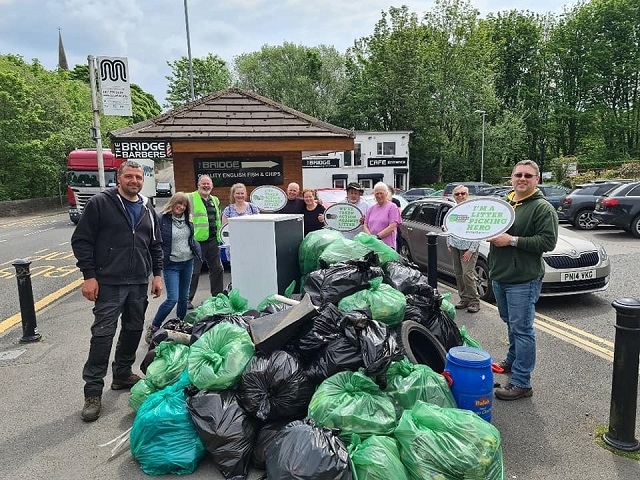 The haul at the Norden Spring Clean

In the past 12 months, people have relied on the places close to home - the local park or green space has provided a place to exercise, play and escape.

Now, the council has pledged its support by asking everyone to do their bit and help clear up the litter that can blight these much-loved places and help the charity achieve a million miles of litter-picking.

This year’s campaign comes as Keep Britain Tidy has reported a massive increase in the number of people who have started litter-picking during the various lockdowns. It has seen the number of #LitterHeroes grow by a third in less than 12 months.

“We supplied litter picking equipment to 50 volunteers in Norden who collected over 100 bags of rubbish; 5 car tyres; a car door and even a fridge freezer over the bank holiday weekend. Plus, an additional 80 volunteers from Wardle and Smithy Bridge scout groups rolled up their sleeves to help the cause, amongst many others across the borough.

“Our parks, open spaces and horticultural services are recognised as some of the best in the UK - that’s testament to our teams; residents, local businesses and volunteers who make such a massive impact all year round - you’re our everyday litter heroes.”

“We have all spent a lot more time in our local area in the past year and have come to realise just how important our local park or green space is for our mental and physical health.

“We need to care for these spaces and the Great British Spring Clean is an opportunity for everyone to take a small action that, collectively, can make a big difference.

“Whether you commit to doing five minutes or five hours, every single pledge will help us reach our million-mile target and clear many tonnes of litter pollution from our environment.”

Rochdale borough has 2,220km of footpaths and 684 hectares of parks to keep clean, so everyone is encouraged to play their part and make a pledge to pick.

In 2019, the charity reported that more than half a million #LitterHeroes collected just under a million bags of litter, weighing around 4,308 tons.

Litter picking kits are available from the council and picked waste can be collected by arrangement.

Find out more about the campaign; make a pledge and book equipment at rochdale.gov.uk/litterpick