You are Here: Home » News » News Headlines » Extremely rare British literature from Honresfeld library to be auctioned off

Extremely rare British literature from Honresfeld library to be auctioned off 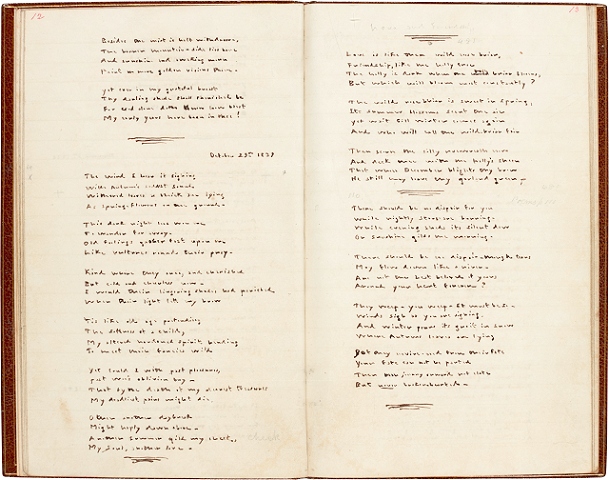 A rare handwritten manuscript of Emily’s poems, mentioned in the preface to Wuthering Heights, with pencil corrections by Charlotte

A book of handwritten poems by Emily Brontë, first editions of Jane Austen novels and a manuscript by Scottish poet Robert Burns – all from the Honresfeld library at Littleborough's Honresfeld House – are to be auctioned off.

The Honresfield library was assembled with passion by self-made Victorian industrialists Alfred and William Law at the turn of the 20th century and has since been maintained with care by generations of the Law family.

More than 500 historic manuscripts, exceptional first editions, intimate letters and beautiful bindings will be offered across three auctions at Sotheby’s, commencing this summer.

Assembled in the golden age of book collecting, the literature found in Honresfeld library tells some of the most fabled stories in history, opening a window onto the short but amazing lives of Charlotte, Emily, Anne and even Branwell Brontë.

Treasures include an extremely rare handwritten copy of Emily’s poems, with revisions from Charlotte and the well-loved Brontë family copy of Bewick’s History of British Birds, the book made famous in the opening pages of Jane Eyre, brimming with entertaining annotations from their father Patrick.

Little-seen letters to and from the likes of fellow novelist Elizabeth Gaskell, Hartley Coleridge (son of poet Samuel Taylor Coleridge), George Smith, publisher and vital champion of ‘The Bells’ (The Brontës’ secretive pseudonym), and many more, abound.

Scottish literature is also at the heart of the collection, which includes the most important manuscript by Scotland’s national poet, Robert Burns, in private hands. A compendium of poems, notes and ideas put together by Burns as an unknown 24-year-old, First Commonplace Book offers a unique insight into the bard’s mind. It was last sold at Sotheby’s in 1879, for £10.

The collection also includes other individual handwritten manuscripts of Burns’s poems and original letters to friends, family, patrons and lovers which build a picture of his colourful life.

Romantic writer Sir Walter Scott – the second-most quoted writer in the Oxford English Dictionary after Shakespeare – is also represented, most notably by the complete manuscript for Rob Roy, one of the last remaining manuscripts of a great 19th century novel that is not now in an institution.

Further noteworthy lots include Jane Austen first editions, including Emma, Northanger Abbey, Persuasion, Pride and Prejudice, a copy of Don Quixote printed in 1620 for Edward Blounte, the publisher famous for the First Folio of Shakespeare's plays, and an annotated copy of Alfred Lord Tennyson’s poems with pages showing author’s changes from proof printing in his hand.

There is hardly an area that is untouched, with Homer, Ovid, the Grimm Brothers, Montaigne, Ann Radcliffe, Horace Walpole, Charles Dickens and Mary Wollstonecraft also making an appearance.

Brothers and local mill owners Alfred and William Law, both unmarried, lived together at Honresfeld House in Littleborough, which had been built for William in 1879 at a cost of £5,068, near their factory in Rochdale. The library took root in the aftermath of an era of Victorian progress and ambition. With a wave of country house building, newly rich industrialists and bankers were eager to display their wealth and taste and given the social status of book collecting at the time, a library was among the first thing to set about buying.

However, the Laws were not quite following in these footsteps. The depth and style of their purchases marked them as ‘sophisticated collectors’ clearly enthralled by their subject, acquiring literature by authors, including many female writers, that they loved who were writing 50 to 100 years before them – perhaps exemplified by the likes of Shirley, Charlotte Brontë’s story of the Yorkshire textile industry.

Indeed, the brothers had grown up less than twenty miles from the Brontë home of Haworth in the 1830s,

Experiencing the 1830s time and landscape immortalised by the Brontë sisters – having grown up less than 20 miles from their Haworth home – these works resonated deeply with the collectors.

When Alfred died in 1913 (William having predeceased him), his chosen heir was his nephew, Sir Alfred Law. This proved to be extremely fortunate for the fate of the library. At a time when many other families faced unexpected estate taxes when recent heirs were killed in the trenches or died young of war injuries, Honresfeld had a continuous owner until 1939.

Alfred was also financially secure, which lessened the temptation to sell his uncles’ treasures as was the case with many similar libraries in the 1920s and 1930s. In November 1939, Sir Alfred Law, who also remained unmarried, died and the library disappeared from public view.

The public will get the chance to view the library, with exhibitions of highlights to take place in London, Edinburgh and New York.